According to Apple’s first official statistics, iOS 12 was installed on 50% of all devices versus 53% of devices introduced in the past four years, 23 days after its debut (via VentureBeat).

While not the fastest adoption in iOS history, it is still way ahead of the adoption rate typical seen for Android devices. 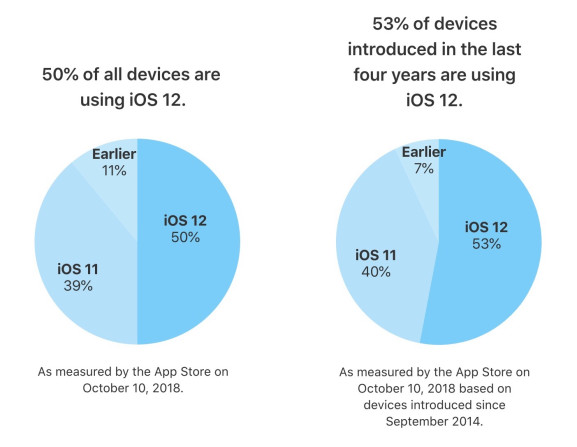 Look at the numbers above, it appears that the adoption of Apple’s latest OS has been faster for newer devices as compared to older hardware. Given the huge size of Apple’s iOS user base, however, getting even half of those users to switch to the latest release in less than a month is a significant milestone.

To put things into perspective, iOS 10 hit a 54% installed base after a month whereas iOS 11 was at 52% after a month and a half.

“iOS 11 peaked at the 85 percent installation mark two weeks before iOS 12 was released. By contrast, Android Oreo at that point was at under 15 percent of the Android userbase. As of Google’s last report on September 28, only 19.2 percent of Android users were on Oreo, with no number listed for the latest release of Pie, as any version representing less than 0.1 percent of the total Android installed base wasn’t shown.”

Have you updated all your iOS devices to iOS 12 yet? If not, let us know what’s holding you back.