iOS 13.4.1 Breaks Bluetooth, Wi-Fi on Some iPhones with No Fix Available 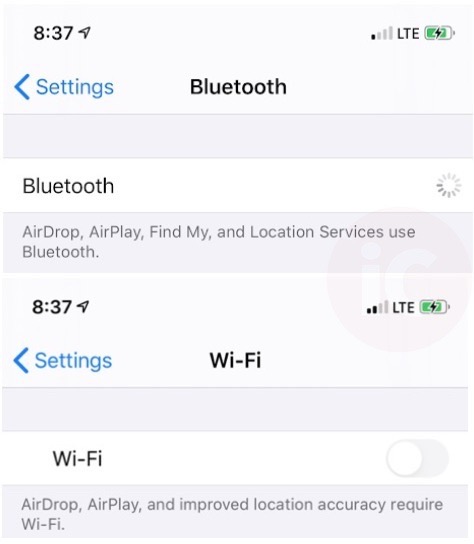 The latest iOS 13.4.1 update appears to have major issues when it comes to Wi-Fi and Bluetooth for some iPhone owners.

According to iPhone in Canada reader Joel, his iPhone X no longer has working Wi-Fi or Bluetooth after installing iOS 13.4.1. Bluetooth just shows up as a spinning circle in iPhone settings, while the Wi-Fi toggle is greyed out. iOS 13.4.1 was released one week ago.

Without working Bluetooth on his iPhone, Joel cannot use his AirPods or Apple Watch, as both rely on Bluetooth connections to connect to his phone. It also means he has to use his cellular data 24/7 as no Wi-Fi is available.

“I upgraded my iPhone X to 13.4 and it broke my Bluetooth and WiFi I was able to revert to 13.3.1 and it worked fine. But today by mistake it applied 13.4.1 and it had the same issue, now I can’t revert to 13.3.1 since Apple [has] stopped signing it and support is refusing to fix the phone–only if I pay $720 plus shipping,” wrote Joel.

“I was with them [Apple] on the phone for almost two hours and nothing. This sounds like a ransom situation where I can’t get back the old update and I can only fix Apple’s bad update for $720, until then I have no WiFi and Bluetooth. So no AirPods or my Apple Watch,” said a frustrated Joel, who said he paid around $1,750 for his iPhone X with AppleCare+ when it was first released in 2017.

Joel says his iPhone is out of warranty and the only way to fix the software bug related to iOS 13.4.1 is to pay for a replacement phone, according to Apple Support.

As for troubleshooting the iOS 13.4.1 Bluetooth and Wi-Fi bug, no fix appears to work. A fresh factory reset without restoring from backup did not fix the issue.

Joel is not alone as various other iPhone customers are also seeing Bluetooth and Wi-Fi broken with iOS 13.4.1, according to the Apple Support Communities.

Are you having any Bluetooth and Wi-Fi issues with iOS 13.4.1?

Google has joined forces with consumer advocacy group OpenMedia to oppose the Liberal government's controversial Online Streaming Act, also known as Bill C-11. The Liberals tabled Bill C-11 in February as an amendment to the Broadcasting Act. It is designed to give the Canadian Radio-television Telecommunications Commission (CRTC) regulatory authority over online streaming platforms, the...
Nehal Malik
45 mins ago

Apple Music has just rolled out the ability for artists and bands to personalize their profile page with a custom bio, as well as the option to add their hometown, birth date or year formed, and more (via MacRumors). Following the latest updates, artists can now also quickly add lyrics for their songs on Apple...
Usman Qureshi
55 mins ago