With iOS 13, Apple rolled out a redesigned Reminders app featuring a new look and feel and some robust organizational features. However, a number of iOS 13 users are experiencing some major iCloud Reminders issues following the latest update. 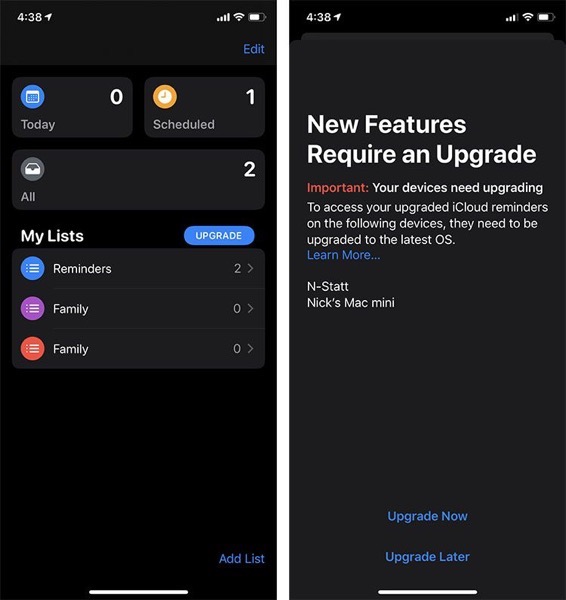 Some users say the Reminders app in iOS 13 fails to sync with notes while others are reporting missing lists or entirely deleted reminders. Some other iCloud syncing errors reported by users in the new Reminders app include names of lists resetting to defaults, dates and times not transferring properly, as well as failure to sync across iOS and macOS devices.

@tim_cook @AppleSupport @Apple
Please fix reminders already! It’s a complete mess. I haven’t been able to access my reminders since updating to iOS 13. Updated my iPhone to 13.1.1 and made it worst. https://t.co/uZM55RP710 won’t even show my reminders any more.

As pointed out by The Verge, Apple has already admitted that reminders will not sync across devices properly unless every single machine is running the latest software, including macOS Catalina which hasn’t yet been released.

“Upgraded reminders aren’t compatible with earlier versions of iOS and macOS. If you upgrade your reminders on your iPhone with iOS 13, your iPad and Mac using the same iCloud account can’t access your reminders until iPadOS and macOS 10.15 Catalina are available,” reads Apple’s support page for the Reminders redesign. But Apple makes no mention of the other issues, which appear to be the result of bugs.

Although it shouldn’t be long before fixes the buggy Reminders in iOS 13, we do recommend giving Wunderlist a try which in our experience, offers a much better overall experience.