The folks over at 9to5Mac have just dug up some new system wallpapers in the latest iOS 16 beta 4 release, which are ready for the highly-anticipated always-on display expected to debut in the ‘iPhone 14 Pro’ models. 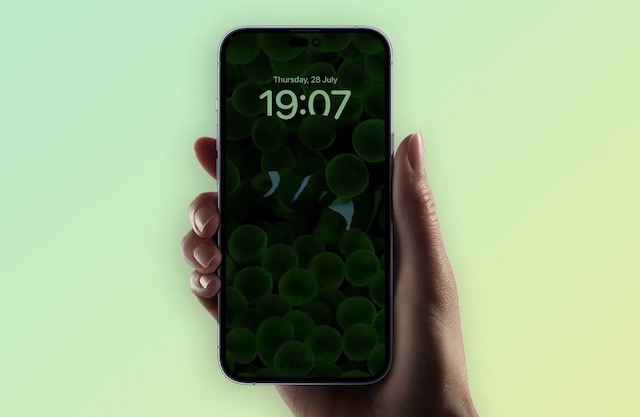 For those who don’t know, the always-on display technology is currently found in Apple Watch Series 5 and later as well as some Android phones. It allows the system to keep showing some information on the screen like the clock while consuming very little battery power.

Since this year’s iPhone Pro devices will reportedly debut a new variable refresh rate display that goes down to 1Hz per second, they should be able to support an always-on display without consuming too much power.

iOS 16 no longer uses static images as wallpapers but instead features wallpapers with multi-layered vectors rendered in real-time.

The source has discovered that in addition to the regular vectors, the native wallpapers also have a new state labeled “Sleep,” which has very dark and faded elements (as shown above).

Wallpapers in this state are quite similar to the Apple Watch faces with always-on enabled. The clock and widgets chosen by the user will also be visible when the screen is off.

The official trailer for the upcoming Apple TV+ original documentary 'Sidney' honouring the life of Hollywood legend Sidney Poitier, has just gone live on YouTube. From producer Oprah Winfrey and directed by Reginald Hudlin, this inspirational documentary honours Poitier and his legacy as an iconic actor, filmmaker, and activist at the center of Hollywood and...
Usman Qureshi
2 hours ago

Airbnb on Tuesday announced the introduction of new anti-party tools in Canada and the U.S. to help prevent unauthorized parties by identifying and declining potentially high-risk reservations. This system looks at factors like history of positive reviews (or lack of positive reviews), length of time the guest has been on Airbnb, length of the trip,...
Nehal Malik
2 hours ago

Computer security researcher Michael Horowitz has today revealed on his blog that iOS devices do not fully route all network traffic through VPNs, a potential security issue Apple has known about for years (via ArsTechnica). Horowitz notes that while all third-party VPN apps seem to provide the device with a new IP address, DNS servers, and a...
Usman Qureshi
3 hours ago