Wow. If you managed to catch the live blogs of WWDC 2011 today, you were in for a real treat. I caught about 3/4 of the show via a live-stream on UStream (a mash up between audio and video) and the audience was electric. Apple made some massive announcements today, and we’re going to summarize the important iOS 5 details. Here’s what you need to know.

iOS by the Numbers
– 44% of the mobile operating system market (Comscore numbers)
– 200 million iOS devices sold (25m iPads in 14 months)
– 15 billion songs sold in iTunes, #1 retailer of music
– 130 million downloads from iBookstore
– 14 billion plus apps downloaded from the App Store
– $2.5 billion plus paid out to developers
– 225 million plus iTunes accounts with credit cards

Scott Forstall took the stage for iOS 5, and walked through 10 new features. iOS 5 will have over 1500 new APIs, and 200 new features.

On the lockscreen, you’ll see notifications. Slide across to access apps. Clear notifications by tapping tiny X icons to the right. Brilliant. 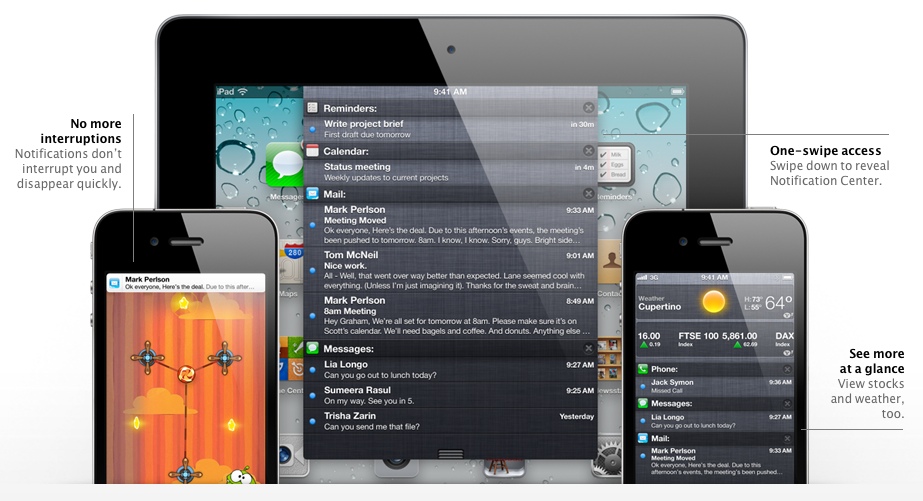 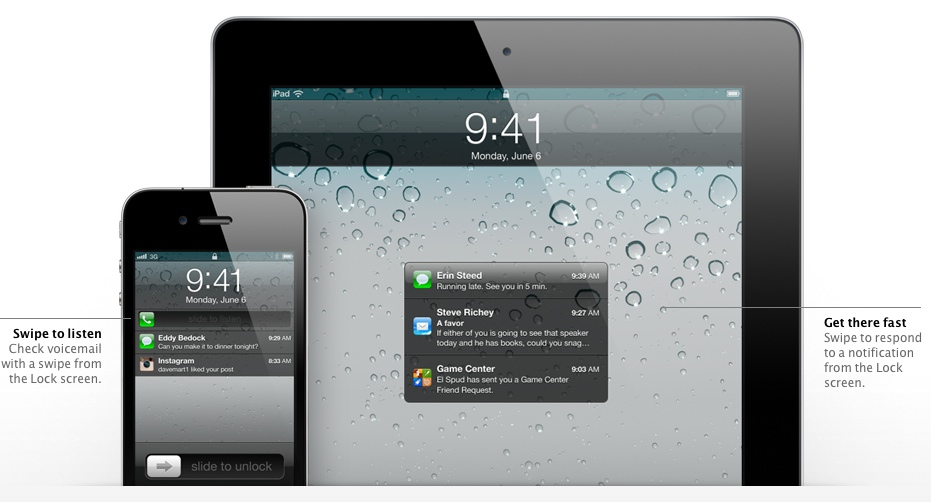 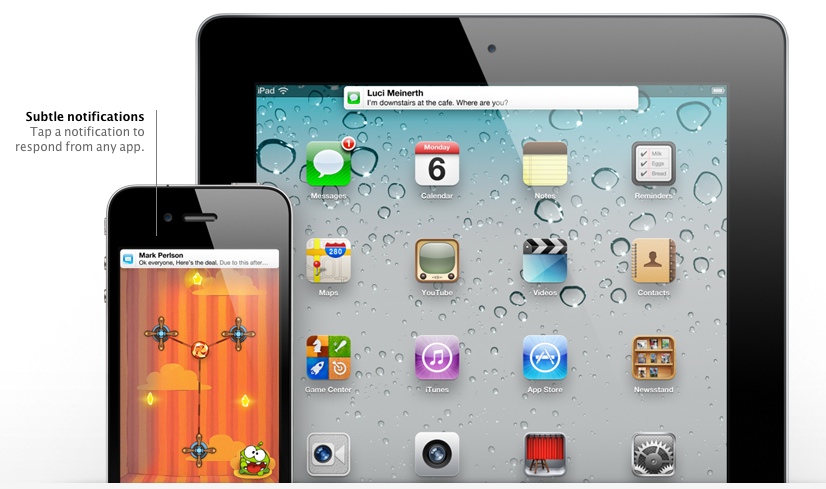 2. Newsstand – essentially iBooks but for magazines and newspapers. Vanity Fair, GQ, Esquire, etc. Once downloaded, they are on your homescreen in a folder. New issues updated automatically, available offline. 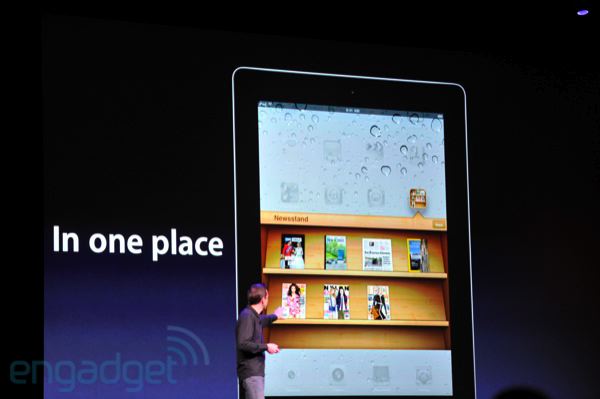 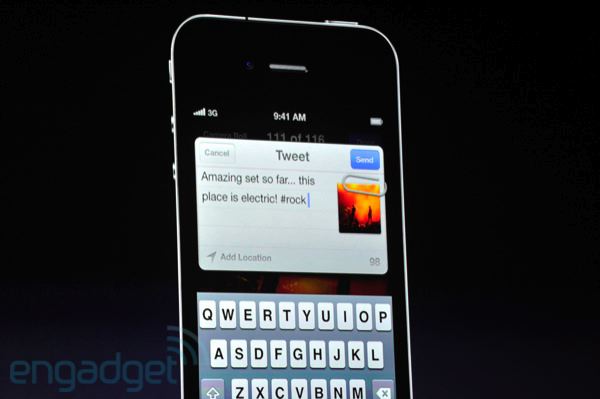 4. Safari – 2/3 of mobile browsing down on Safari. New features…
Safari Reader: makes web pages easy to read without ads
Reading List: this is like Instapaper to save links for reading later.
Tabbed Browsing: ‘lightning fast’ to switch between windows 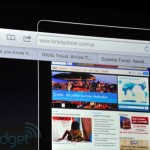 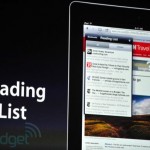 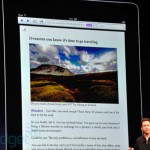 5. Reminders – a built in list making app that uses a geofence, and will send you reminders. Once you leave or enter a particular location, you’ll get an alert. Like, if you’re driving near the grocery store you’ll see your reminder to buy milk. Okay, there goes my upcoming review of Georeme. 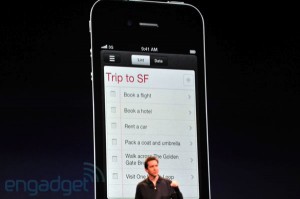 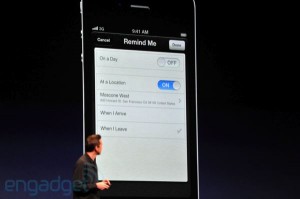 Lock screen shortcut: We’ve been waiting for this. Shortcut to camera app, even when passcode lock is on. Nothing else can be accessed. Take a picture with the Volume Up button (a page from Camera+ I see?). Gridlines, pinch-to-zoom, single tap focus/exposure locks. You can now edit photos: crop, rotate, reduce red-eye and even one click enhance. 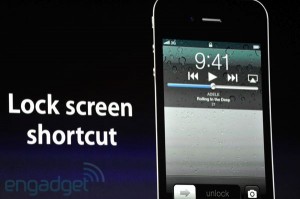 7. Mail – much anticipated features: rich-text formatting, indentation control, you can now drag addresses, flag messages, and search entire messages. Dictionary is now built into all apps, and S/MIME is being added for security. 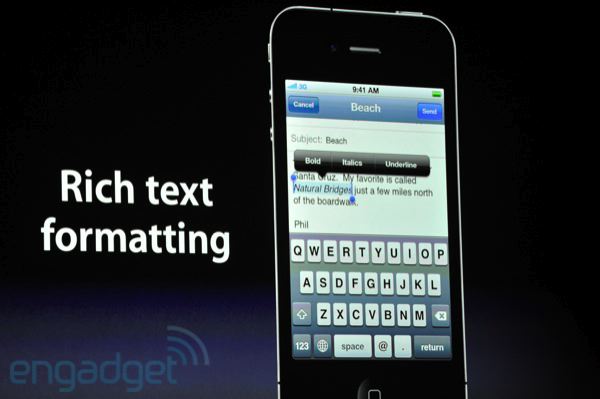 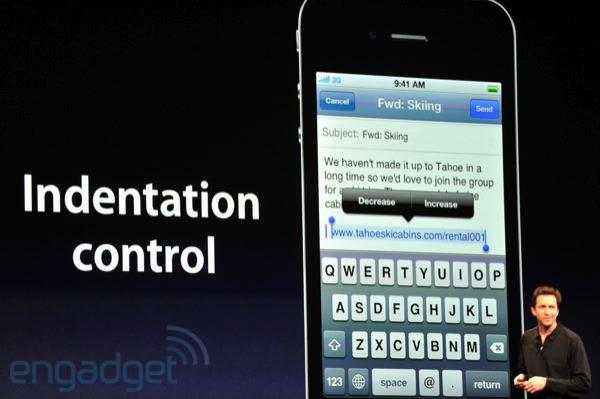 8. PC Free – This was a huge surprise, but was anticipated by rumours from John Gruber. You can now setup iOS devices out of the box without connecting to iTunes! What’s even better, are software updates will be over-the-air (OTA)! These will be Delta updates, meaning only what’s NEW will update, instead of redownloading an entire iOS. Brilliant! 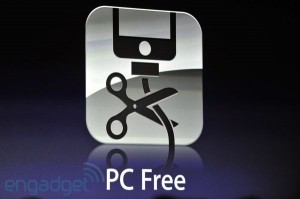 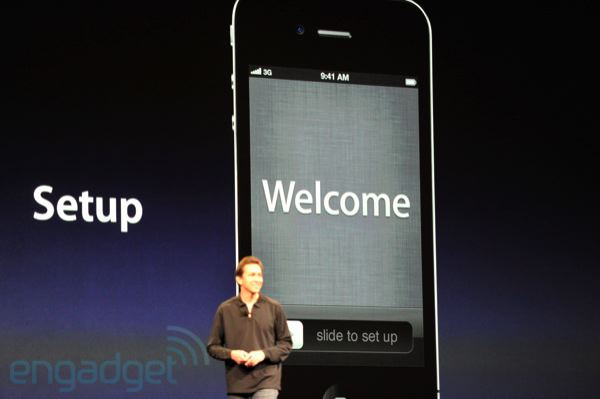 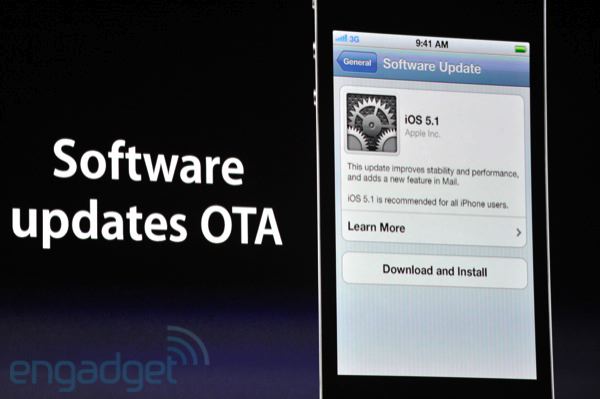 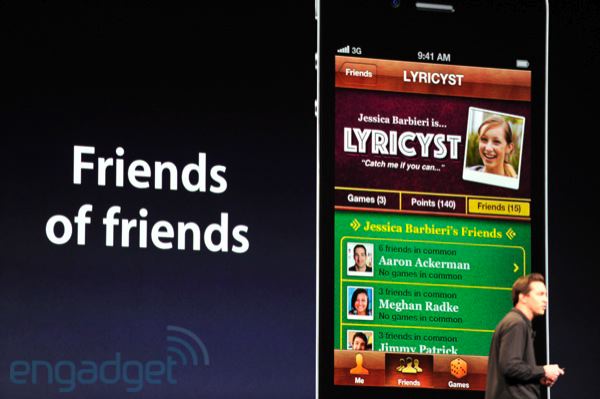 10. iMessage – This is THE killer app. A new messaging service for all iOS devices (iPhone, iPad, iPod touch). This is the BBM killer. You’ll get delivery receipts, read receipts, typing indication, and Push. You can send pictures too.

A cross platform messaging service so if you started a chat on your iPhone, you can continue it from your iPad. Works over 3G/WiFi. Man, watch out WhatsApp! 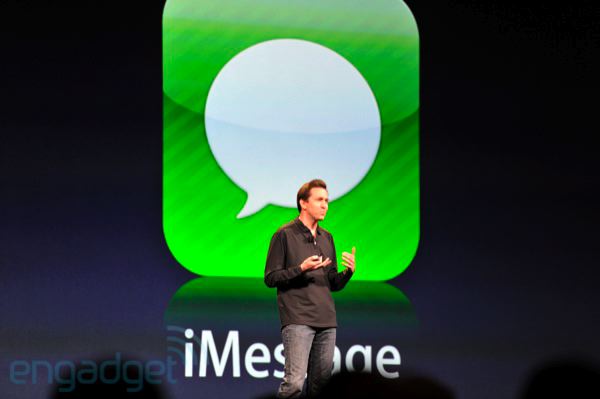 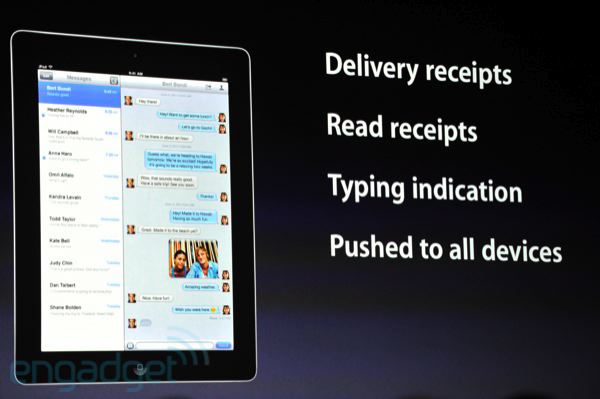 So these were the 10 new features covered by Scott, but here are some features not discussed in detail: 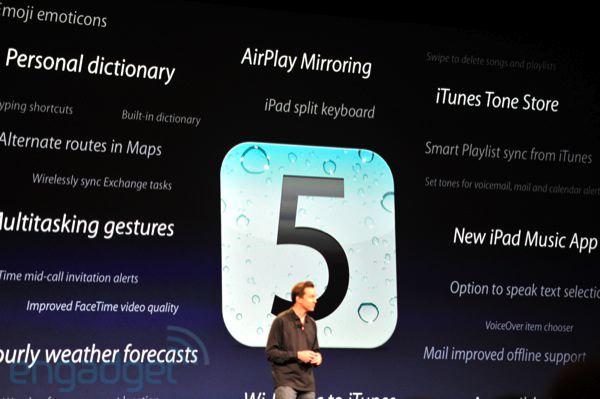 Steve Comes on Stage for iCloud

Steve talks about how a decade ago he saw the computer as a hub for our lives. Now Apple is going to move us to the Cloud. “iCloud stores your content and wirelessly pushes it to all of your devices.” Essentially it is what MobileMe should’ve been. Contacts, Calendars, and Mail all synced on all devices–for FREE. 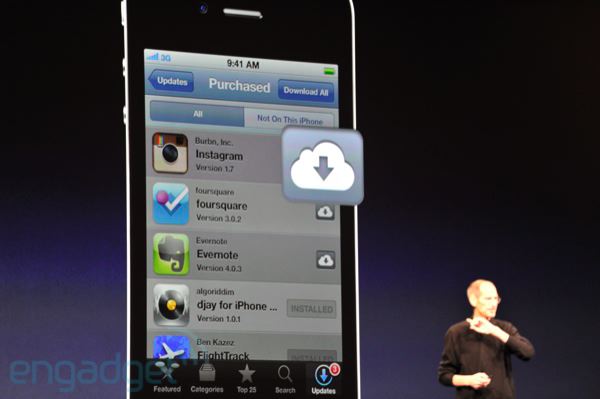 The App Store will allow for downloaded apps to be pushed (US ONLY) to any of your iOS devices, without paying again. Same with iBooks.

Everyday, content will be backed up. Once you get a new iOS device, just login to your Apple ID and your content will be right there. We’re talking music, apps, books, photos, videos, device settings, app data. Bam. 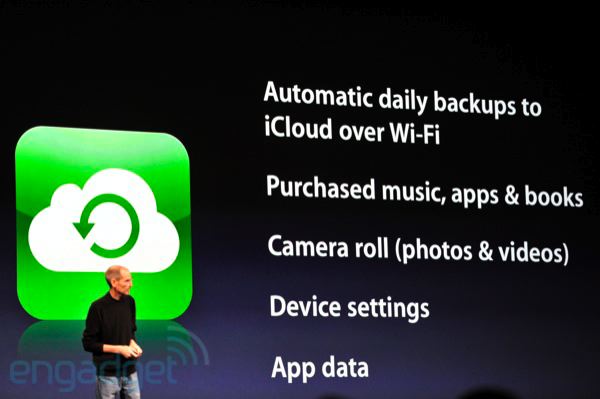 Documents in the Cloud

For Page, Numbers, and Keynote–your documents will be automatically saved to iCloud, including changes, and will work on Mac and PCs too. Apple wants to eliminate the file system. iOS is making computing easy again.

All photos are pushed to iCloud, built right in (including iPhoto on Macs). Photos will go to Apple TV as well. Photos are kept for 30 days in the cloud, and will store the last 1000 photos. Will work over WiFi.

iTunes in the Cloud

All your purchases from iTunes will be pushed to all devices–for no additional charge. Multiple downloads to all devices for free! Not only that, high quality 256 kbps AAC, and pushed to up to 10 devices. This service, again, is free. 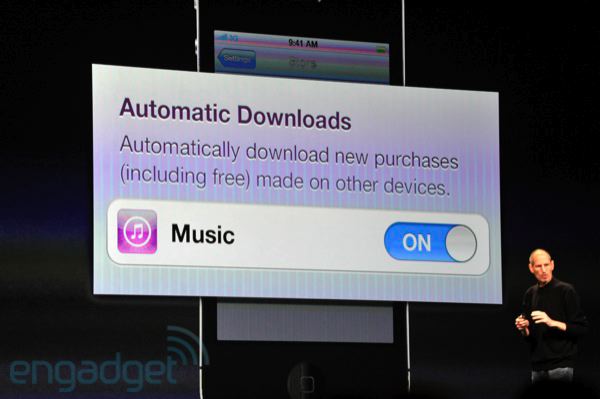 Users will get 5GB of free storage for Mail, Documents, and Backup (purchased music, apps, and books don’t count). iCloud will ship with iOS 5 this Fall. Today, iOS 4.3 beta will be out, and will include the ability to sync devices over WiFi or cable.

I thought an iPhone announcement was coming…but of course that wasn’t going to happen. The big story is iTunes Match for $24.99/year. Instead of uploading your entire iTunes library to the cloud, this service will scan your library for existing songs. Once found, you won’t have to upload them. The service ‘takes minutes’. 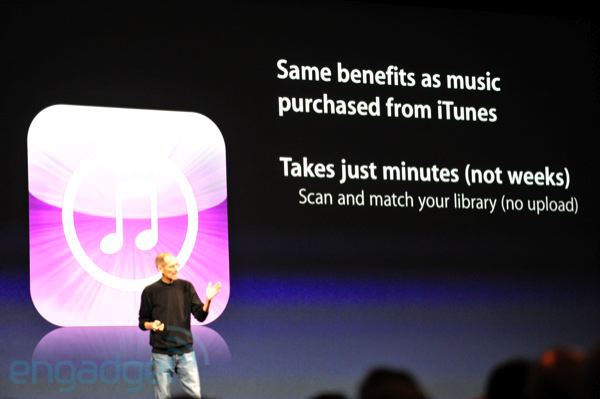 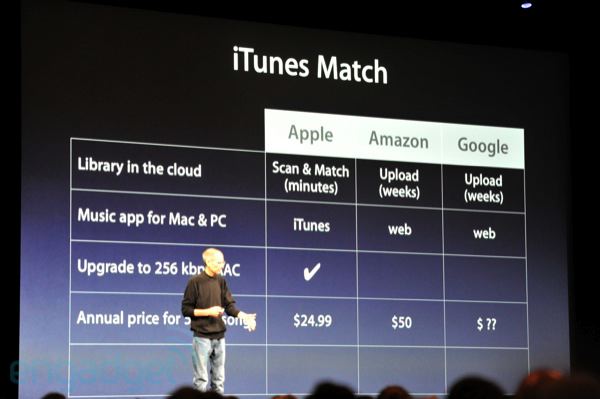 
Steve Jobs goes on to say they are serious about iCloud, this is their third data centre completed. The circled area below represents two people–that’s how large the data centre is. 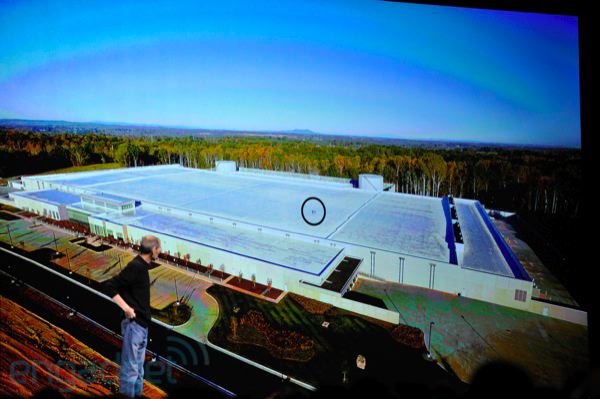 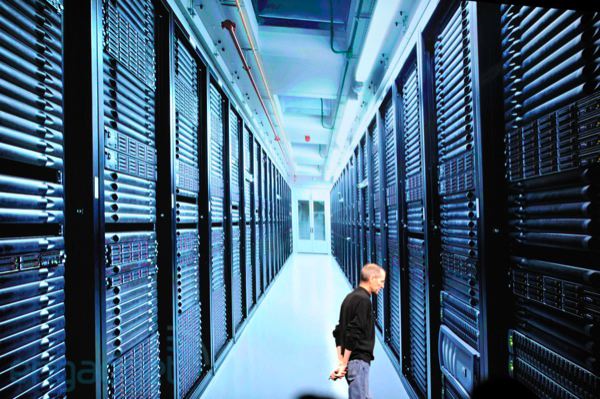 Thoughts on the Announcement of iOS 5 and iCloud

What was interesting about this keynote is how Steve Jobs was not front and centre, aside from the intro and introducing iCloud. The rest of the keynote was executed perfectly by the rest of the Apple senior team.

My most anticipated features: iMessage (the BBM killer), iCloud, Reminders, and Twitter. I can’t wait to get my hands on the iOS beta build.

Last night, I made a few predictions on my WWDC Eve Wishlist that came to fruition today:

– Notifications: this was a given though
– Text tones: coming in the iTunes Tone Store
– iChat: I’ve been preaching for this for the longest time (just ask @justinluey) and iMessage came to life.
– Lockscreen: now being utilized for notifications
– Camera: volume button trigger (I guessed launching of the app)

All in all, iOS 5 is a massive update, and will be arriving this Fall. I predict it will coincide with a new iPhone hardware update. It would be perfect for a September announcement.

Apple has also updated their homepage to reflect iCloud. Watch the video of the keynote here.

What did you enjoy the most from today’s big day?

Thanks to Engadget, This is my Next, and MacRumors Live for the incredible live coverage as always.