iOS 9 Can Automatically Install Software Updates While You Sleep [PIC]

iOS 9 is set to launch publicly this fall and when it does, one new feature can help save you a lot of time when it comes to software updates.

Typically when a software update is available, users must wait for the over-the-air update to download, then install, which makes devices inoperable during the process. However, a new feature is set to eliminate daytime installs for good.

When a software update is available and a user is connected to Wi-Fi, a new prompt informs users “iOS 9 can update automatically between 11:00 PM and 6:00 AM while connected to power.” 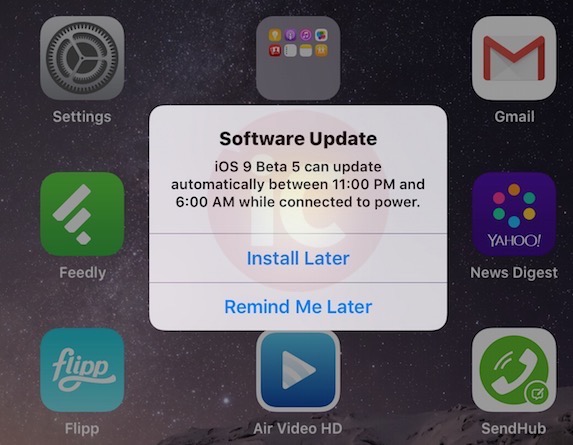 If users agree to ‘Install Later’, iOS 9 prompts you to enter your passcode, agree to terms and conditions and then will seamlessly install the update between the morning hours while you’re asleep, while your device is connected to power.

iOS already performs iCloud backups when connected to power and Wi-Fi, so this additional feature can save users time and have them wake up to the latest version of iOS.

Also, for users without sufficient space to download software updates, iOS 9 can temporarily delete apps and automatically reinstall them after the update.

Apple is expected to announce a specific release date for iOS 9 at its next special event, rumoured for September 9 (BuzzFeed’s John Paczkowski has very accurate Apple sources), where many anticipate the unveiling of the ‘iPhone 6s’, new iPads and a next-gen Apple TV.

After iOS 16.1 beta users discovered Adaptive Transparency enabled for the original AirPods Pro and AirPods Max, we’re now finding out this is actually a “bug”. That’s according to what Bloomberg’s Mark Gurman shared on Monday morning, citing the MacRumors report. “I’m told this is a bug,” said Gurman in his retweet. He later clarified the […]
Gary Ng
51 mins ago