It appears the iOS Camera Roll has a security and privacy issue as an existing bug that allows anyone to view your deleted photos, in this case through the form of thumbnails.

The bug, which was relayed to us from iPhoneinCanada.ca reader Ken from Access Winnipeg, explains the bug has reportedly been around since iOS 5 and was previously reported to Apple in 2012 but never fixed.

Here’s how the bug works: when users save a transparent .PNG image, the Camera Roll will restore the thumbnail of your last deleted photo. The process can be repeated indefinitely to reveal unlimited thumbnail image access.

Ken created a quick Tumblr site over here so you can try this bug yourself. Just tap and save the image, then jump to your Camera Roll. You’ll see a previously deleted thumbnail image appear. If you tap it, you won’t be able to see the image, as only the thumbnail is viewable.

We have tested this ourselves and it indeed works as described. 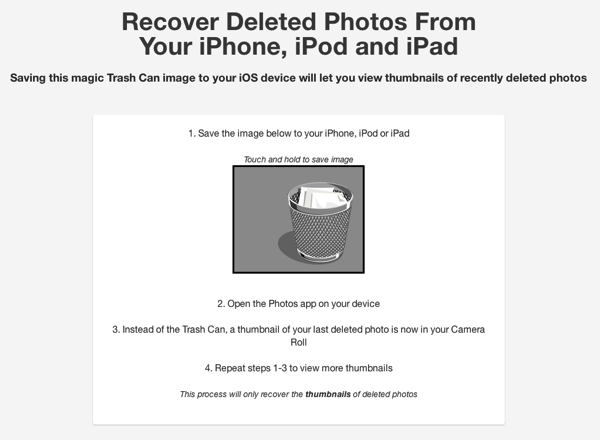 This bug means anyone who has access to your phone can pry into your previously deleted photo thumbnails if they are aware of the process. You can use your imagination to see how this bug can cause security and/or privacy issues. The issue was brought to light for the purpose of letting Apple know about this bug so it can be fixed in a future iOS update.

Let us know what deleted thumbnail images you were able to recover.