As noted by MacStories’ Federico Viticci on Twitter, Apple has started showing alerts of price increases for renewable subscriptions on iPhones and iPads. 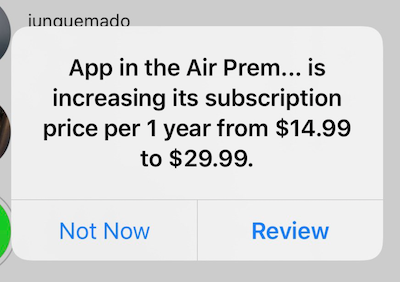 An alert appears when one of your subscriptions increases its renewal price and asks you to review the new price to keep the subscription active. When you tap the ‘Review’ button, you will be taken to an App Store screen with more details.

For the first time, my iPhone alerted me that one of my renewable subscriptions increased their price. Tapping the ‘Review’ button took me to an App Store screen with more details. Never seen this before – pretty nice solution from Apple. pic.twitter.com/NwIwmX1R0r

Let us know if you have seen a similar alert on your iOS device.