Apple introduced the new and improved iPad Mini 4 at last week’s special event alongside the all-new iPad Pro, although the company did not get any more specific about the tablet’s specifications. The folks over ArsTechnica have just gotten their hands on the new iPad Mini 4, and have confirmed that the tablet uses a 1.5GHz Apple A8 with 2GB of RAM, which is faster than both the 1.4GHz A8 in the iPhone 6 and 6 Plus and the 1.3GHz A7 in the iPad Mini 2 and Mini 3. 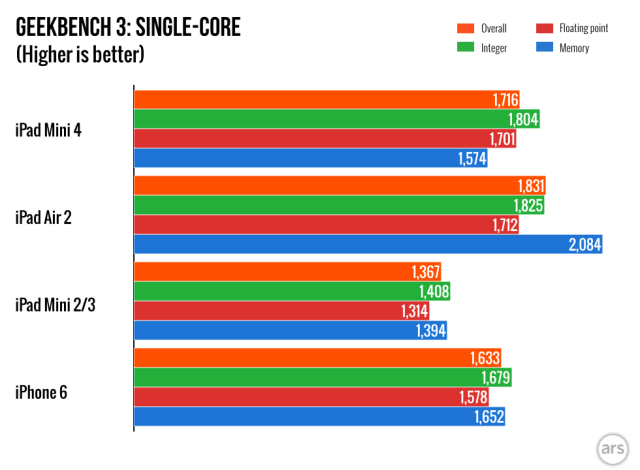 As you can notice in the above Geekbench 3 scores for the various devices, a whole extra CPU core makes the 1.5GHz A8X in the iPad Air 2 significantly faster than the Mini 4. However, we’re still looking at around 20% improvement in performance over the old Mini 2 and Mini 3 devices. The source notes that the extra RAM will be good for more than just Split View multitasking in iOS 9, such as cutting down on the amount of tab reloading that Safari does and reducing wait times when switching between different apps.

“Most iOS devices released since 2012 have included 1GB of RAM, iPad Air 2 aside, but this appears to be the year when Apple bumps up memory capacities across the lineup. The iPhone 6S and 6S Plus should include 2GB of RAM, and Apple’s documentation confirms that the new Apple TV includes 2GB as well”.

In comparison, the iPad Pro, which is due to be released in November, is said to include 4GB of RAM.

Microsoft has revealed the first wave of Xbox Game Pass titles arriving on the service throughout October 2022. Kicking off the month, many of the games capture the spirit of the spooky season, leading into Halloween. This month, Xbox Game Pass subscribers can gain access to brand new titles available day and date such as...
Steve Vegvari
30 mins ago