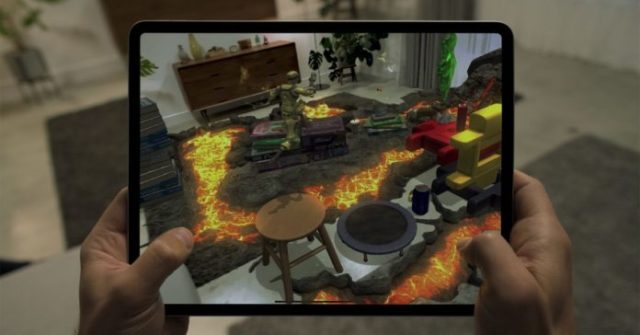 Klei Entertainment’s Hot Lava is already quite the quirky game. Inspired by the childhood game of jumping on furniture and other obstacles to avoid the imaginary floor of lava, Hot Lava brings that to life and injects some early 90s nostalgia while doing so. Now, the fouth-generation iPad Pro utilizing the LiDAR Scanner can make your living room a Hot Lava course.

Reported by The Verge, Klei Entertainment is planning on taking full advantage of the new 2020 iPad Pro’s AR capabilities via the LiDAR Scanner to bring their fast-paced platformer to your own living spaces.

Based on the description of how the AR mode works, players can scan their living room, or realistically, any larger space with the iPad Pro. Afterwards, the game will generate a series of obstacles and platforms and fill the floor in with, you guessed it, lava. From there, the game plays out much like the standard version, players will have to navigate the platforms, pick up collectibles, and make it to the finish line in record time.

While Hot Lava has been released on Steam, it has built itself quite the audience through being an Apple Arcade exclusive title. Having been a launch title for Apple Arcade, many players flocked to the game, adoring its silliness and unique gameplay mechanics. Hot Lava features multiplayer support with a common area where players can interact with each other before heading to one of the many courses to compete in short races. In addition, players can unlock cosmetic items by completing challenges.

While no release date has been set on Hot Lava‘s new AR mode, Apple has indicated that it will be available later this year.

Apple has highlighted its built-in accessibility features across iPhone, iPad and Apple Watch, in a new video shared this morning titled, ‘The Greatest’, showing how its software features offer new tools for those with disabilities. “At Apple, we believe accessibility is a human right. Innovative features like Door Detection, Sound Recognition, Voice Control, and more […]
Gary Ng
36 mins ago