iPhone 4 Self Combusts Aboard Just-Landed Aircraft

BGR points to a press release from Australian airline Regional Express describing an incident where an iPhone self combusted onboard an aircraft just after landing.

Regional Express (Rex) flight ZL319 operating from Lismore to Sydney today had an occurrence after landing, when a passenger’s mobile phone started emitting a significant amount of dense smoke, accompanied by a red glow.

In accordance with company standard safety procedures, the Flight Attendant carried out recovery actions immediately and the red glow was extinguished successfully.

No one was harmed in the incident. 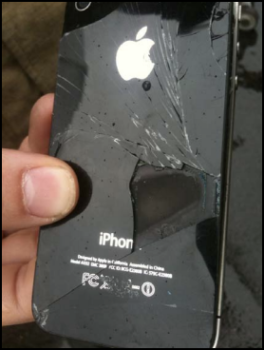 An accompanying photo shows the device with a shattered rear panel and a burn mark where the battery is located. Based on the photo, BGR indicates that the device is an iPhone 4.

While iPhone-related combustion is not unheard of, most reported incidents occur while the device is charging. This is the first report of an iPhone combusting on an aircraft.

The press release offers no additional information on the circumstances surrounding the incident, such as whether the device was being used. The Australian Transport Safety Bureau has collected the device as part of its investigation. It’ll be interesting to see the final report and possibly learn what the root cause was.

Apple recently launched its iPhone 14 series of devices, introducing the new 'Plus' model to the fold. The 6.7-inch device joined the standard iPhone 14 as part of the entry-level offering. However, prior to its official reveal, the iPhone 14 Plus looks to have been called the 'iPhone 14 Max.' According to Dutch blog iCreate (via...
Steve Vegvari
12 mins ago