Could Apple’s iPhone 5 margins be lowering due to the higher cost of goods for the latest iPhone? That could be the case according to Pacific Crest analyst, Andy Hargreaves (via AllThingsD):

According to Hargreaves, the cost of goods sold for the iPhone 5 is $370, higher than anticipated and because of this, he believes it will lower Apple’s overall gross margin for the December quarter from 40% to 38.8%:

“Apple will have to sell more devices in order to maintain earnings,” Hargreaves explained to AllThingsD. “What happens now: I believe Apple should continue to try to gain share in the near-term, but ultimately should accept the limits of its market or come up with a new $100 billion product or service to drive growth.” 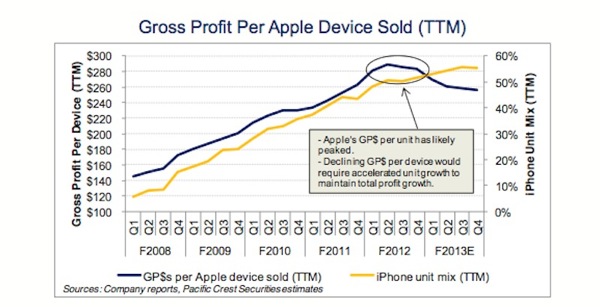 Even with a higher cost of goods for the iPhone 5, the Pacific Crest analyst still notes there is strong demand for Apple products. Based on their research the iPhone 5 is still “outselling its closest competition (which is iPhone 4S in some cases) by more than 4X,” and as for the iPad, it continues to sell well. His target for Apple’s stock price has been adjusted to $645 from $670 over concerns Apple’s gross profit per unit will continue to further decline.