The iPhone 5’s anodized aluminum edges may be slightly more prone to daily wear but the real test of time would be how well the device’s chassis holds up against every day drops, in comparison to its biggest market competitor, the Samsung Galaxy S3. Looks like the folks over at Android Authority already have the answer to that as they’ve carried out the first ever iPhone 5 drop test, opposite to the Samsung Galaxy S3. 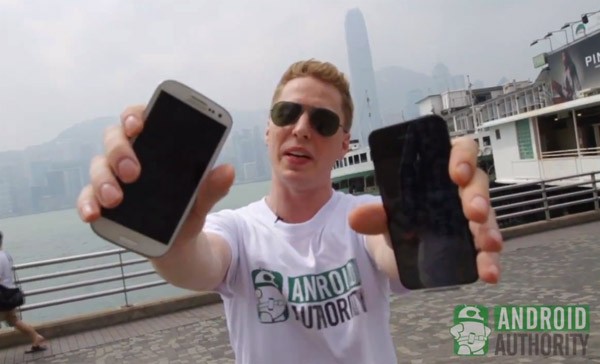 Even though the guys who’ve done the iPhone 5 drop test are Android fans, they are calling it a “rock solid” device, a claim they wouldn’t make that often for an iOS device. They’ve admitted that iPhone 5 did amazingly well in their drop test, while the Samsung Galaxy S3 came out in pretty bad shape.

This morning in Hong Kong, Darcy dropped the Galaxy S3 and the iPhone 5 a total of four times, each time from an increasing height. To make our drop test more realistic, we tried to recreate the accidents that happen most often in real life. We ruthlessly let the two devices fall to the hard pavement, just to see what happens. Needless to say, it wasn’t pretty. Dayum!

The hard aluminum shell of the iPhone 5 withstood the impact pretty well, and the glass protecting the display remained intact. Meanwhile, the Galaxy S3 predictably lost its back cover and suffered damage to the casing and the front glass.

See it for yourselves in the following video: