The most recent Strategy Analytics report reveals that for the first time since its launch, the iPhone 5 has become the world’s best-selling smartphone, having superseded Samsung’s Galaxy S3 flagship handset in the holiday quarter of 2012. 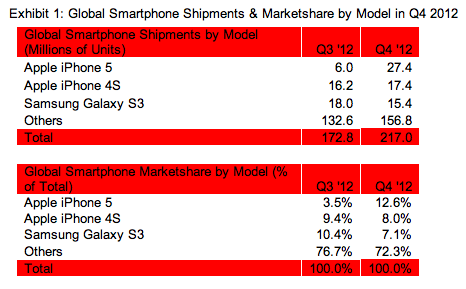 But this isn’t all: Samsung’s high-end smartphone sales also fell below sales of the iPhone 4S. According to Strategy Analytics’ data, Apple shipped 17.4 million iPhone 4S units, while the South Korean manufacturer shipped only 15.4 million Galaxy S3 units during the fourth quarter of 2012, capturing 7% of the global market.

The iPhone 5 and 4S combined accounted for 20% of all smartphones shipped worldwide during the holiday quarter, an impressive performance from Apple. Furthermore, as the January data shows, Samsung has sold 40 million Galaxy S3 handsets during the eight months of its presence on the market, while Apple has sold 33.4 million iPhone 5 units since its launch, in September. The numbers speak for themselves.