iPhone 5S is a Massive Hit in China, Makes up 10% of all iPhones

Latest data released by market research company Counterpoint has revealed that iPhone 5S has been a massive hit in China, comprising 12% of smartphone sales in the region during the month of October (via The Guardian). More interestingly, the result comes before China Mobile, the world’s largest carrier, begins taking preorders for the phone starting today, ahead of an official announcement of a 4G network next week. 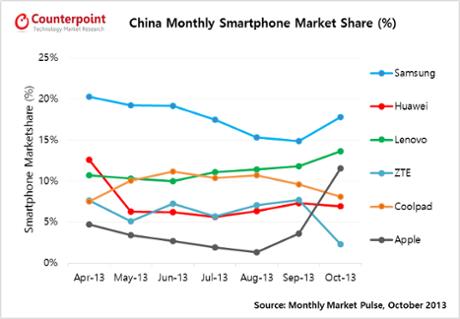 A separate data from analytics firm Mixpanel suggests that the iPhone 5S now makes up 10% of all iPhones in use in China. The source also claims that China’s iPhone 5S sales pushed Apple’s flagship phone to become the best-selling phone worldwide during October. Tom Kang, a researcher at Counterpoint, says that although the 5S didn’t create the long queues that the release of the 4S in China did in early 2012, it definitely was more successful compared to what the iPhone 5 was in terms of overall sales.

Neil Shah of Counterpoint said: “Apple’s smartphone marketshare climbed to the 12% mark in China inOctober, instantly making it the third largest smartphone player in the market – up from a modest 3% share in September.”

The abrupt jump suggests that Chinese buyers were waiting for the much-expected new models of the phone – and particularly the more expensive 5S, which is seen as a status symbol among some wealthier consumers. With a launch on China Mobile, which has more than 750m subscribers, imminent, Kang points out that it will be available on the three main carriers in the country.

Kang also noted that the iPhone 5S may well allow Apple to reach the top smartphone seller spot in December or January in China. Currently, the company ranks 3rd behind the first place Samsung and second place Lenovo.