iPhone 5S Is At No.1 At All U.S. Carriers And In International Markets [Canaccord] 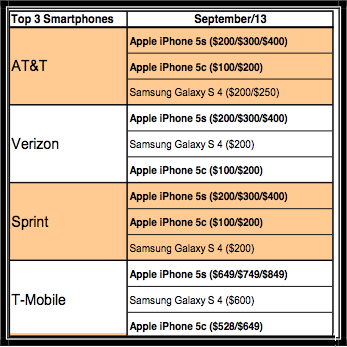 Canaccord Genuity’s T. Michael Walkley has written in a recent note to clients that Apple’s iPhone 5S is currently the No. 1 selling smartphone at all U.S. carriers and also in international markets, Fortune is reporting. He also added that except for Verizon and T-Mobile, iPhone 5C is the second best selling handset across all U.S. carriers. Samsung’s Galaxy S4 is currently outselling the iPhone 5C at these two carriers.

“Our September surveys indicated very strong initial sales and back orders for the iPhone 5s and strong iPhone 5c sales at the four tier-1 U.S. carriers and also in international markets.”

The latest report from Canaccord also includes the first published chart (shown above) of where Apple’s new iPhones stood last month with respect to their competition at each of the major U.S. carriers. As Fortune’s Philip Elmer-DeWitt notes, the iPhone 5S selling briskly is ‘no surprise’. What’s really surprising is how well the iPhone 5C is doing. The survey reveals it is out-selling Samsung’s Galaxy S4 at AT&T and Sprint, despite shortages in certain colors and memory configurations.

The reason for the Galaxy S4 being a No. 2 seller at Verizon and T-Mobile is reported to be the price cuts that Samsung initiated back in June:

“We believe these price cuts combined with Samsung’s aggressive marketing and effective advertising campaign for its existing and new high-tier smartphones, such as the recently-launched Galaxy Note 3, could potentially help Samsung reduce high-tier smartphone share losses to Apple in October despite the strong iPhone 5s and 5c demand.”