Apple has introduced an all new Lightning connector in the iPhone 5, replacing the old dock connector for all future iOS devices. The new connector is not only incredibly small, but also allows for reversible use i.e you can plug the cable into the device in either orientation. A closer look at how this new Lightning connector works has revealed that the 8 pins on each side of the plug are dynamically assigned that takes advantage of iPhone 5’s unique chip, Apple Insider is reporting. 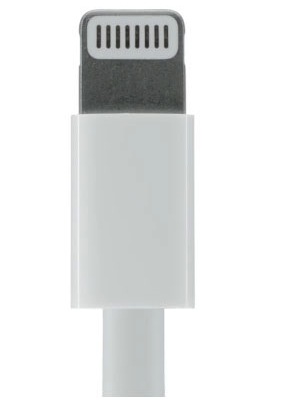 Cabling expert Peter from Double Helix Cables has discovered that Lightning connector cables feature integrated authentication chips. He has also learned that the layout of the pins must be dynamically assigned based on how the cable is physically plugged in to a device like the iPhone 5.

Some features of the Lightning cable, such as USB power connections, are symmetrical on each side of the plug. That means that if the pins on Lightning are numbered from one to eight on each side, pin one on the top row connects with pin eight on the bottom row.

This allows users to flip the connector and plug Lightning into an iPhone 5 in either orientation. With this design decision, the lower right pin always makes contact with the same spot in the corresponding Lightning jack on the iPhone. However, while the USB power connection is symmetrical, Peter’s testing found that the data connections in Lightning are actually asymmetrical.

Peter believes that the iPhone 5 Lightning port probably reads the type of data being sent from one of the pins, and then dynamically adjusts based on the orientation that the cable has been inserted. He also said that there is no way for cheap third party lightning cables available though Chinese resellers to be functional.

The report also claims that given the apparent complexity of the new Lightning plug, Apple is already seeing shortage of Lightning cables following the launch of the iPhone 5.