Apple has (in theory) started taking iPhone 6 and iPhone 6 Plus pre-orders at 12:01 am PST, selling out its initial stock of 5.5-inch units in just a couple of hours, followed by the smaller, 4.7-inch model.

Those who remained awake had the chance to grab the first wave of units available, although, as the hundreds of posts show, it was a challenge to get the eagerly awaited iPhone 6 Plus units. Just a few hours later, the online availability of the bigger iPhone 6 was pushed back by weeks, and those who wanted to order one this morning had to face the harsh reality: either line up in front of the store hours ahead of opening, or wait. 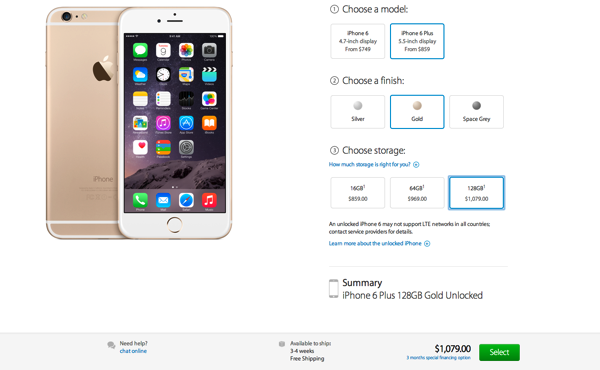 Interestingly, the biggest interest was around the iPhone 6 Plus, as early in the morning the 4.7-inch iPhone 6 was still available for delivery between September 19 and 23. As of writing the article the entry level version is available to ship in 7-10 business days for the silver and space grey units, but, if you are after the gold version, you’ll have to wait up to 4 weeks. The only version currently available (ships between September 19-3) is the 128GB iPhone 6 in space grey.

All versions of the iPhone 6 Plus are only available to ship in 3-4 weeks.

Which iPhone 6 are you? What version have you managed to pre-order? Or did you choose the online reservation option?

Update: An Apple representative told Re/code that the overnight sales of the new iPhones set a record:

“Response to iPhone 6 and iPhone 6 Plus has been incredible with a record number of preorders overnight,” Apple told Re/code.