iPhone 6 Pre-Orders to Take Place on Sept. 19 in the Netherlands?

Earlier today, we reported that China Mobile has already started offering pre-orders for 4.7” and 5.5” iPhone 6 devices and now, an anonymous source inside “a well-known Dutch carrier” is claiming that the iPhone 6 pre-orders will officially begin on September 19, iPhonez is reporting. 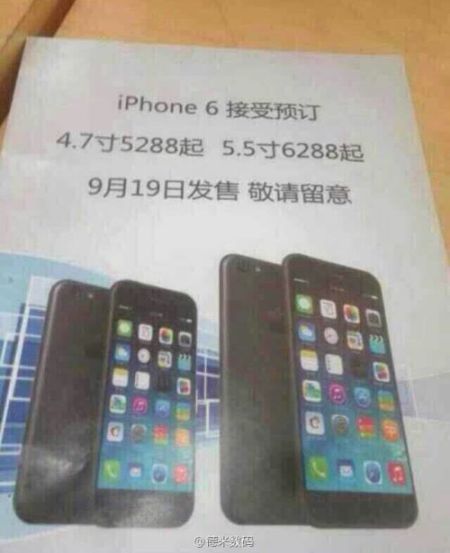 According to the report, the “reliable source” had also managed to leak an authentic picture of the Samsung Galaxy Alpha. While the source did not reveal which Dutch carrier it is involved with, it did say that a standard iPhone 6 (with 16GB of storage) will be at a subscription of around €55. This also suggests that the price of the iPhone 6 will remain the same (€699) as last year.

Interestingly, the source claims there will only be a 4.7” version at launch:

[Machine Translation]: “Otherwise it will only go to one model, where it is that it is obvious the 4.7-inch iPhone 6 In the backend system would also nothing to indicate that there are two different iPhone 6 models are marketed . Currently, the provider would be busy testing the 4G + / LTE-Advanced technology so it can start offering new subscriptions, which are based on higher data rates. Shortly after the launch of the iPhone 6 Additional staff will be deployed to allow the launch of the iPhone 6 as smoothly as possible to expire next week.”

The report also says Apple will start shipping preorders on September 26. These dates sound like they are for a second wave of iPhone launches.

Call of Duty: Warzone Mobile may receive a regional launch. Apparently, the mobile-only spin-off of Activision Blizzard's hit battle royale is now available to install on Google Play in Australia. Earlier this month, Call of Duty: Warzone Mobile became available to preregister on the App Store as well as the Google Play Store. At the time,...
Steve Vegvari
12 mins ago