Although it was launched eight months ago, the iPhone 6 and its bigger brother, the Phone 6 Plus, continue to generate healthy demand worldwide, and Samsung’s S6 and S6 Edge couldn’t compete during the first three weeks of availability, according to a recent report from CounterPoint (via the Wall Street Journal).

Since their launch, Samsung has shipped about 10 million units of the Galaxy S6 and S6 Edge. Of those, only 60% (6 million) were sold to customers in the three weeks after the devices were launched on April 10, Counterpoint’s monthly Market Pulse report reveals.

While demand seems to be higher for the latest devices – the S6 series accounted for 21% of all Samsung sales during April 2015, compared to last year’s S5, which accounted for only 16% in April 2014 – what the research firm found alarming is that Samsung is cannibalizing its own flagship model sales, leaving Apple’s market share unaffected, which has grown since the launch of the iPhone 6 and 6 Plus.

By comparison, sales numbers of Apple’s latest devices were 51% higher than those of last year’s iPhone 5s and 5c combined, propelling the company to the top of the world’s best-selling smartphones list for April 2015. 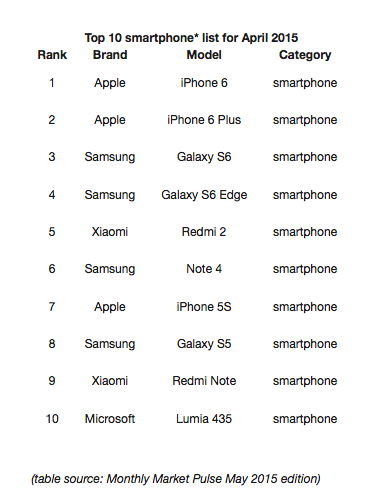