Yesterday, a bunch of photos purportedly showing the ‘iPhone 7 Plus’ packaging suggested that the widely rumoured wireless earbuds from Apple dubbed ‘AirPods’ might actually come bundled with the new iPhones. Today, another set of photos alleging to show the back of Apple’s ‘iPhone 7’ packaging has hit the web, also hinting that Apple’s all-new bluetooth “AirPods” will be included with some iPhone models, AppleInsider is reporting. 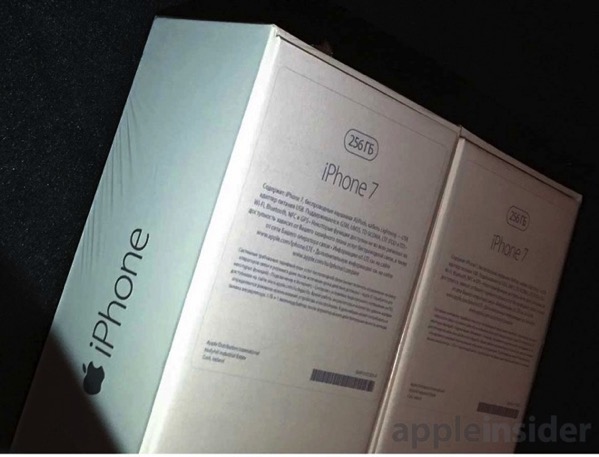 The newly leaked ‘iPhone 7’ box pictures come out of Russia, and show details for a 256GB model revealing that wireless “AirPods” are included with the phone. While the “AirPods” are listed as included, the Lightning to headphone jack adapter depicted on previously leaked box pictures is not mentioned. As always, the authenticity of the photos remains questionable.

“Casting some doubt on authenticity, the label on the back of the box is also clearly a sticker. Apple has recently been printing directly on the box backs, with the shift to printed packaging and away from a sticker on the box taking place with the launch of the iPhone 6.

The text is centered on the sticker, also in contrast to iPhone 6 and 6s packaging having left-justified text. And recent iPhone models have not printed the product name large at the top of the box, like is shown in the latest Russian leak”.

As the source points out, if these leaks do turn out to be legitimate, it would mean that Apple will have a staggering amount of individual model numbers, spanning not just models, but colors, capacities, and now the choice of wired or wireless bundled earbuds.