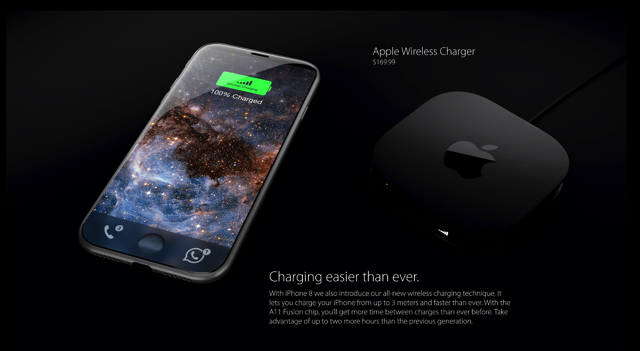 In a research note issued today, JPMorgan has highlighted that Apple’s upcoming iPhones will feature wireless charging capabilities provided by Broadcom. Although the analyst firm did not mention which iPhone models will sport the new functionality, KGI analyst Ming-Chi Kuo has previously claimed that the ‘iPhone 8’, as well the iPhone 7s and 7s Plus, will all support wireless charging, CNBC reports.

JPMorgan didn’t specifically identify which wireless charging standard the new iPhone chips will support — Qi and PMA are the two main competitors in the space — though Broadcom sells chips that support both.

Earlier this year, however, Apple joined the Wireless Power Consortium, which backs the Qi standard. That doesn’t necessarily mean Apple will support only Qi. Samsung is also a member of the consortium, and its Galaxy smartphones support Qi and PMA.

According to the analyst firm, Apple’s upcoming iPhones will pack Bluetooth 5.0 chips, which will allow Bluetooth accessories, such as headphones and speakers, to work at longer distances from an iPhone.

The latest Bluetooth standard also allows multiple Bluetooth devices to be used at the same time, suggesting that if Apple enables it, two users may be able watch a movie on an iPhone with two Bluetooth headphones.