According to KGI Securities analyst Ming-Chi Kuo, this year’s ‘iPhone 8’ will adopt a higher-cost stacked logic board design, that will support longer battery life and allow the smaller 4.7” model to pack battery capacity of the current 5.5” iPhone, MacRumors is reporting. He added that the battery life of an ‘iPhone 8’ with OLED display will be better than that of a 5.5” LCD model, as OLED panels are much more energy-efficient. 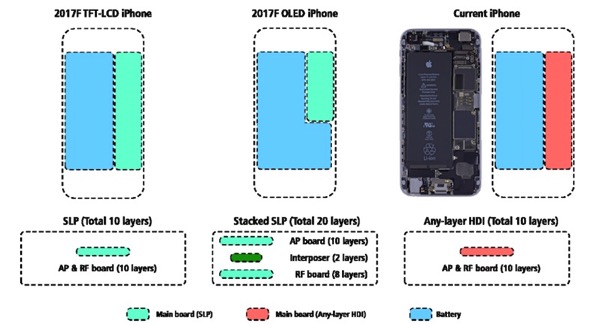 The analyst, who expects the device to have around a 2,700 mAh L-shaped two-cell battery pack, explained that the stacked logic board, also known as a “substrate-like PCB mainboard”, will result in the ‘iPhone 8’ with an OLED display having similar dimensions to a 4.7-inch iPhone, yet comparable battery life to a 5.5-inch iPhone.

“As battery material tech isn’t likely to see major breakthroughs in the next 3-5 years, mainboard area can only be reduced via stacked SLP, which makes space for larger battery and extended usage time. Thanks to stacked SLP, we expect the OLED iPhone to have similar dimensions to a 4.7” TFT-LCD iPhone, and have comparable battery capacity (equipped with around 2,700 mAh L-shaped 2-cell battery pack) to a 5.5” TFT-LCD iPhone. The battery life of the OLED iPhone could be better than that of the 5.5” TFT-LCD model as OLED panels are more energy-efficient than their TFT-LCD counterparts”.