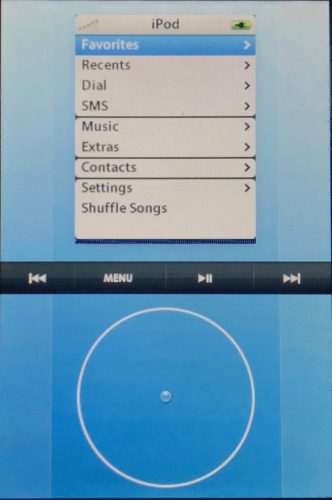 Instead of the modern touch-driven interface we now call iOS, it featured an operating system dubbed “Acorn OS” (this was an internal code name, and it unclear if it would have kept that name if it had been released), which is derived from the acorn shown on boot. It presents an on-screen click wheel, which took up the bottom portion of the screen, and on the other half of the screen, a UI identical to the one found on the beloved iPod, with options such as “Dial”, “SMS”, “Music”, “Contacts” and “Recents”, however lacking a browser option. The interface is interacted with in the same way an iPod would be operated.

Back in 2013, it was revealed Apple’s secret project known as “P1”, which was to turn the iPod into a phone, did indeed have a click wheel interface, according to former iPod VP Tony Fadell, and based on his quote below, it sounds like “Acorn OS”:

“We started with an iPod Mini and tried to make it a phone,” recalls Tony Fadell, Apple’s former senior VP of its iPod division. “We actually built a phone with a click wheel–it worked like a rotary dial.”

From Apple’s patent trial with Samsung in 2014, details of the original iPhone’s development was revealed. Engineer Greg Christie detailed the system Apple created to test an early version of iPhone OS back in 2006, codenamed “Wallaby”. Here is an image of the test setup below:

The iPod click wheel interface is very interesting. I don’t know how practical it would have been, but it’s always cool to see stuff like this get revealed.