Apple’s iPhone was Santa’s present of choice, market analytics firm Flurry concluded after analyzing new device activations from this Christmas. The iPhone accounted for more than half (51.3%) of all such activations recorded worldwide from December 19 to the 25, Flurry’s data shows. 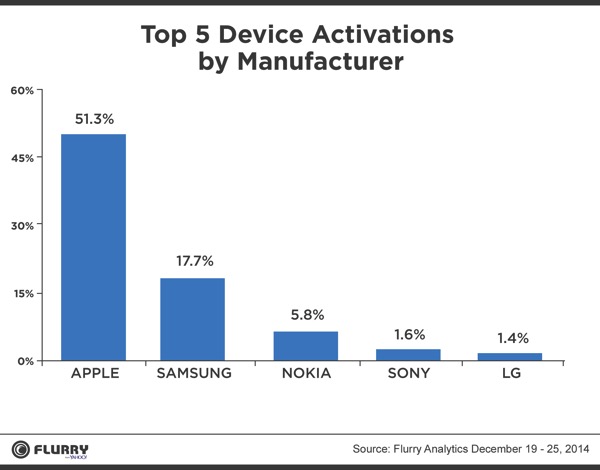 To put this in perspective, for every Samsung devices that was activated, Apple activated 2.9 devices. For every Microsoft Lumia device activated, Apple activated 8.8 devices. While, the holidays in general and Christmas in particular are not the sole indicator of the smartphone market share and trends, it is safe to say that Apple’s newly released iPhone 6 and iPhone 6 Plus have had a blockbuster holiday season, despite a lackluster holiday season for the consumer electronics industry. 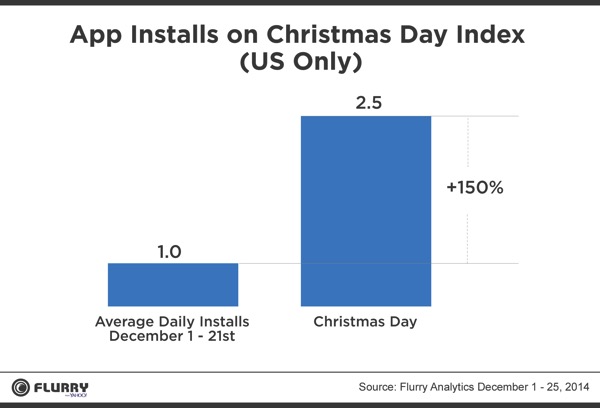 When looking at app installs, Flurry says this year it tracked 2.5x the number of app installs in comparison to an average day in the first three weeks of December in the US, a mature market.

The data gathered also highlights the rising demand for phablets: with the iPhone 6 Plus Apple has a great device to ride that trend. To put that demand into perspective, Flurry highlights device activations it recorded in the week leading up to Christmas: phablets accounted for 13% of all activations, compared to just 4% recorded the same period a year ago.

The iPhone 6 was the #1 device, while the iPhone 6 Plus among the top 5 devices activated during Christmas. Flurry joins other analysts in predicting a blockbuster holiday season for Apple, with iPhone sale estimates of up to 70 million units in this quarter alone.