iPhone 6 and 6 Plus Demand Exceeding Supply in Holiday Quarter: Analyst

The demand for the iPhone 6 and 6 Plus units still exceeds supply, the latest research from store polls initiated by Piper Jaffray reveals. In a note sent to investors, the investment firm laid out their findings and projections for this quarter (via AppleInsider). 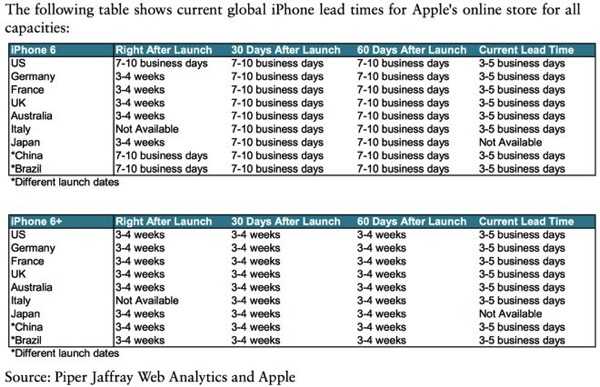 After surveying 80 Apple Stores about their iPhone stock, Piper Jaffray has found that only 56% of core configurations were available as of last Friday, December 12, 2014. This means iPhone stock is down 2% compared to the previous survey conducted on November 14, but up considerably compared to the availability tracked in October.

Jaffray analyst Gene Munster, however, expects supply to approach 80% by the end of the year, although he had previously hoped that Apple would reach 100% in stock before the end of this quarter.

The new models seem to be more attractive to iPhone buyers, as the inventory is much tighter compared to last year, Munster highlights. He also points to Apple’s guidance issued for the holiday quarter: Apple was aware that supply would heavily influence iPhone sales. This makes more sense in the light of Tim Cook’s words: “We are selling everything we make”.

The Piper Jaffray survey, however, includes only the supply of Apple Stores, but we know that the iPhone mostly sells through Apple’s carrier partners, with in-store sales accounting for roughly 20% of all iPhone sales.

Twitter Blue has once again been working on bringing its edit button to the fold. In a new tweet, the premium subscription of the social media platform shows off how the edit function will work both in terms of the user tweeting as well as the general audience seeing the changes. Earlier in September, Twitter...
Steve Vegvari
1 min ago