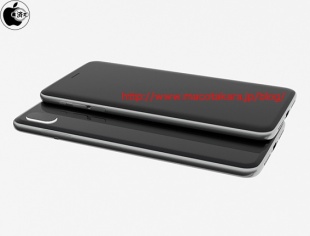 According to a new report from Japanese blog Mac Otakara, Apple is in the process of finalizing its design specifications for the so-called “iPhone Edition,” which is expected to debut alongside the “iPhone 7s” and “iPhone 7s Plus” models later this year.

The report claims the forthcoming smartphone will feature a polished stainless steel “glass sandwich” design, vertical iSight camera array for augmented reality functionality and a flat OLED display. According to unnamed sources familiar with the matter, the glass sandwich design has made it through Apple’s engineering verification testing (EVT) process.

Sources claim that Apple intends to use an “improved” version of the stainless steel currently used to produce Apple Watch products.

While the glass itself is said to feature a slightly curved “2.5D” profile like current iPhone 7 models, the OLED display it covers is to be completely flat. This particular tidbit contradicts a string of rumors suggesting Apple plans to integrate iPhone’s first curved OLED screen later this year.

With the removal of iPhone’s home button, analyst Ming-Chi Kuo and others have hinted that Apple is planning to embed Touch ID fingerprint recognition technology beneath the handset’s display.