According to a report by The Sydney Morning Herald, a 36-year old bicycle rider from Sydney named Gareth Clear, was left with third-degree burns when his Apple iPhone exploded after a minor fall. Clear says that his iPhone was in his back pocket and ignited after he had a fall from his bike this Sunday. The Australian biker is now on a mission to raise awareness among iPhone users of the potential dangers of Apple’s smartphone.

“I just saw smoke coming out of my back pocket…and then all of a sudden I felt this surging pain,” he said, adding that he felt a “searing heat” as the phone burnt through his riding shorts in a matter of seconds.

“I just remember looking at my leg and I had this black discharge all down my leg and this smell of phosphorus,” he said.

The Australian Competition and Consumer Commission (ACCC) is said to routinely receive around one to two reports of consumer injuries from mobile phone batteries. According to an ACCC spokesperson, the incident is being investigated in collaboration with NSW Fair Trading. “Lithium batteries are vulnerable to significant physical impact, [which] may damage the extremely thin separators that keep the elements of the battery apart”, he said. 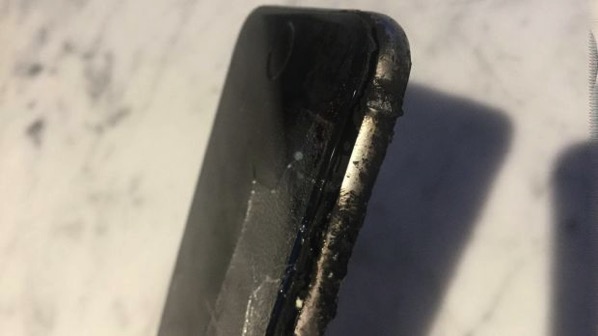 Clear was told at the burns unit at the Royal North Shore Hospital that he had third-degree burns on his upper right thigh, and had to have a skin graft. Apple’s Australia-based office has not commented on the incident.