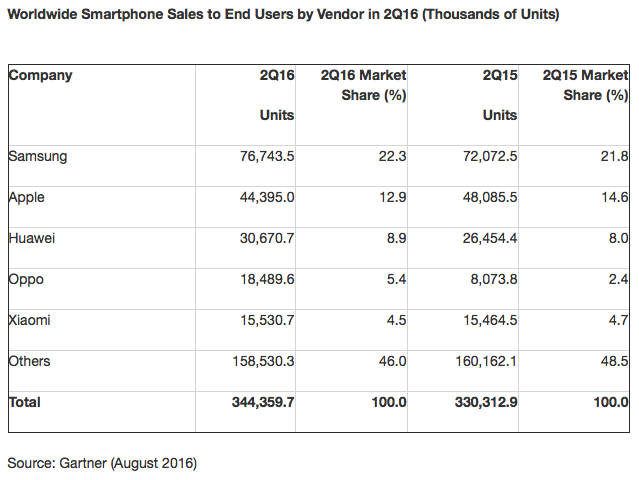 Apple has continued to post slower than usual iPhone sales with the second calendar quarter, Gartner notes in its latest report. In fact, iPhone sales dropped 7.7% in the three month period between April and the end of June, as sales declined in North America, as well as Western Europe (via TechCrunch).

While Apple is losing market share, Samsung is gaining it: the South Korean manufacturer had 10% more share in the global smartphone market than Apple in the second calendar quarter, helped by its new smartphone portfolio.

As of the end of June, Apple controlled 12.9% of the global smartphone market. Android smartphones on the other hand controlled 86.2% of the global market, according to Gartner. As the analysts note Android’s performance came from demand for mid- to lower-end smartphones from emerging markets, but also from premium smartphones, which recorded a 6.5 percent increase in the second quarter of 2016.

Global smartphone sales totalled 344 million units in the second quarter of 2016, a 4.3% increase compared to the same period a year prior, according to Gartner. Only five vendors from the top 10 showed growth during this period, and among them we find Chinese manufacturers Huawei, Oppo, Xiaomi and BBK Communication Equipment) and South Korea’s Samsung.

Apple has removed the vocals from its "Big and Bigger" advertisement for the iPhone 14 and iPhone 14 Plus (via Reddit). While Apple hasn't said what caused the move, it was likely a result of people mishearing lyrics in Idris Elba's Biggest, the song the spot is set to. In the post-chorus of the song...
Nehal Malik
32 mins ago