According to a Raymond James analyst Tavis McCourt’s calculation, Apple outsold Samsung’s Galaxy S line of smartphones running Android, including the two generation of Galaxy Note when compared to iPhone 4, 4S and 5. 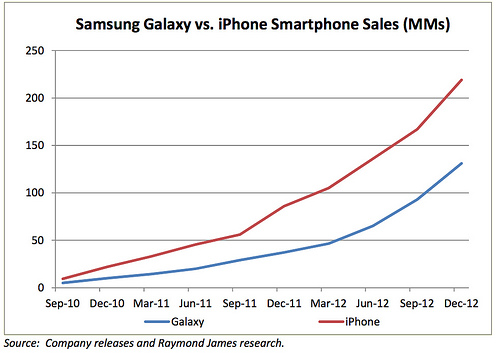 Despite Samsung’s high-end smartphones being ‘tremendously successful’, the analyst estimates that the iPhone has extended its lead in volume shipments over Samsung in the past 12 months with nearly 100 million units. 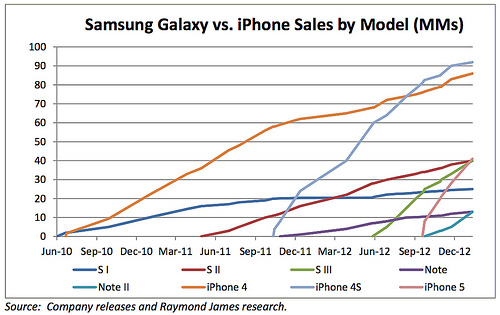 McCourt compiled the above graph using Samsung’s recent announcement that the company has sold more than 100 million Galaxy S Series smartphones. To compare the data with Apple’s, he used the Cupertino company’s opening weekend sales announcements assuming that about 66% of the quarterly reported iPhone units were for the newest generation and 17% for prior generation models. Also, for the fourth quarter McCourt used Raymond James’ own 48 million estimate for iPhone sales.

Long story short, one thing is certain: Despite Samsung retaining the most sought-after smartphone OEM title, its flagship devices just can’t catch up with the iPhone as we previously highlighted by putting the public number side-by-side. Our own research based on public numbers show that Samsung sold 10 million Galaxy Note I and 5 million Galaxy Note 2 devices, which sets the total Galaxy S line handsets to 115 million.

The picture gets fuzzy and the quantity of sales favor Samsung, however, when we include all the handsets the manufacturer has for sale.