New research shows that every new iPhone model since the A9 chip has shown diminishing performance returns.

New research from Creative Strategies’ Ben Bajarin on iPhone performance gains over the years shows that diminishing returns have largely set in from model to new model, but the overall gains are still impressive.

“While I will admit there is a small percentage of Apple customers who upgrade every year and a percentage more who upgrade every two years because they are on upgrade plans, the vast majority of consumers upgrade every 3-4 years,” reads the report. “I thought it would be interesting to look at some basic iPhone benchmarks through the years and look at how much performance improvement happens every four years.”

According to the report, if users upgrade their iPhone every three to four years — the average upgrade time period for the average smartphone user — they’ll see, on average, around a doubling in performance. 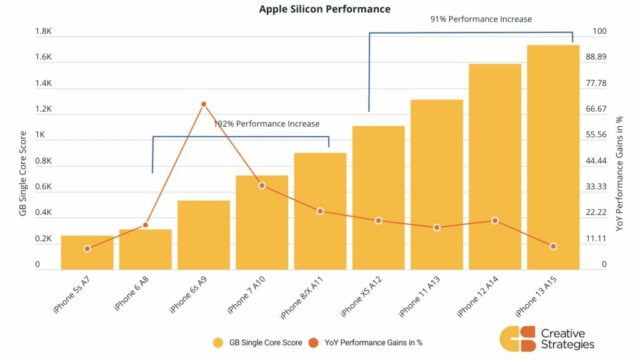 “As I benchmarked the A15 Bionic in different ways and pondered how Apple spends its transistor budget with each A-series chip cycle, an interesting shift emerged for iPhone 13,” the report explains. “Going back to how Apple spends their transistor budget on features, not necessarily performance, for the A15, Apple looks to have had the most GPU gains YoY since the A9. For the past five years, Apple has had an average of 19% GPU gains YoY but for the A15 Bionic, Apple has increased GPU performance by 52%.”

The above chart shows a couple things. First, we see the absolute performance gains each year, which appears to be a relatively steady upward progress. But second, in the red line, Bajarin plots the year-on-year percentage improvements, which shows a different picture as it’s an overall downward trend from the A9 chip onwards.

There are a few things to note when observing this information. First, Apple is the leader in mobile chip technology, so these small gains each year are still the most substantial in the industry. Second, Apple this year lost a number of key chip engineers and still pulled off a 10 percent increase in performance. Lastly, while the new A15 chip is a slightly improved design, it’s still based on a 5nm process like last year’s A14.

Head over to Creative Strategies for more in-depth information on the study.