According to a new Bloomberg report, Apple’s upcoming ‘iPhone SE’ won’t be packed full of technological innovations, and will be targeted at those users who are still holding on to the more than two-year-old iPhone 5/5s or iPhone 5C. “It will really just replace the 5s at the low end of the lineup,” said Chris Caso, a Susquehanna International Group analyst with a positive rating on Apple shares. 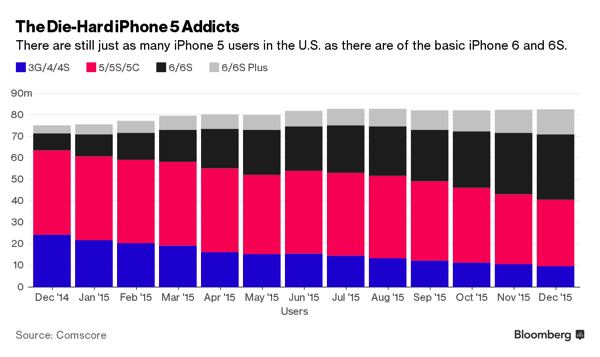 The New York-based analyst points out that the 5s is getting too old and that it won’t be able to run the operating system that well for much longer. While analysts from UBS Group AG and RBC Capital Markets predict the annual shipments of the new handset to be around 15 million, they believe that “its smaller size and lower price could encourage existing customers to step up at a time of year when sales often decelerate”. Last year, Apple sold over 231 million iPhones, with a sales dip between April and September similar to previous years.

“The replacement cycle for iPhones has stretched to 27 months,” compared with the 23 months of two years ago, RBC analyst Amit Daryanani wrote in a note to clients this week. The new handset will “ensure that consumers who have a three-year-old 5S or 5C don’t switch to Android for lack of new iPhone products.”

Apple’s new lower-end model may persuade customers to stick with the company’s products, allowing it to sell services through the App Store or subscription-based products such as Apple Music and iCloud. The new smartphone will boast a faster processor than the 5S, a person familiar with the details has said. Like the iPhone 5C, it may also be available in a variety of colors, analysts have said.

In addition to a new 4-inch iPhone, Apple is also expected to unveil a new iPad at Monday’s media event.