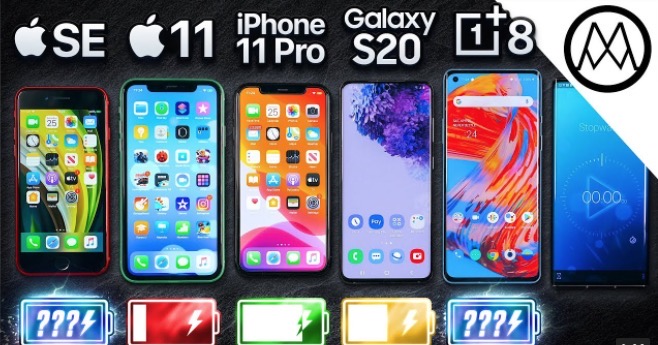 YouTube channel Mrwhosetheboss has shared a battery comparison test video, putting the new 2020 iPhone SE against the iPhone 11 and iPhone 11 Pro, along with the Samsung Galaxy S20 and OnePlus 8.

The battery test puts each phone through a series of apps, games and more, to drain the battery in somewhat real-life scenarios.

How did the iPhone SE (2020) do? With the smallest battery, it came in fifth place and lasted for 3 hours and 46 minutes. Check out the full results below:

“Even though in a day-to-day scenario when you’re not using it for three hours of continuous screen on time it’ll feel like more than that. I can’t behind actively recommending a phone to buy with endurance like this. Even if you’re not a power user—even for medium usage, this is not going to cut it,” concludes Mrwhosetheboss.

According to Apple’s description of iPhone SE battery life?

The show must go on. So iPhone SE lets you watch up to 13 hours of video on a single charge. When you do need to power up, just set it down on a wireless charger. Or connect to an 18W fast-charge adapter to go from zero to up to 50 percent in 30 minutes.

It really boils down to how you use your iPhone when it comes to battery life. If you’re a basic user, the iPhone SE should have no problem lasting a full day. But the video shows medium to heavy users might need to carry a portable battery pack like the olden days.