Gene Munster, senior research analyst at Piper Jaffray has released his latest research report to conclude the Apple brand is still the most popular amongst teens in the U.S., due to iPhone and iPad popularity.

As of Fall 2013, the iPhone represented nearly 55% all phones used by teens and the iPad family remained at close to 70% share of tablet ownership. We believe that while Samsung seemingly had some momentum with teens over the past year, Apple’s brand and product quality has enabled it to remain the top choice for teen consumer electronics. 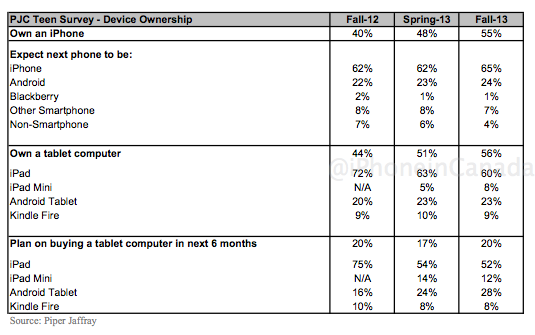 Munster believes his survey reveals the iPhone should continue to increase its share amongst teen users, despite Android purchase expectations which have remained stabled at the mid-20% range, while non iOS/Android devices continue to lose marketshare.

As for the iPad, demand for the device amongst teens also remains steady, as 56% admit they own tablets compared to 51% in Spring 2013. Out of these teens with tablets, 68% owned an iPad (60% iPad; 8% iPad mini), the same percentage from Spring 2013. Of those teens ready to buy a tablet in the next six months, 64% declared it would be an iPad.

Munster notes a future design change by Apple could also increase demand, with the full sized iPad remains “highly desired”. Just this afternoon AllThingsD reported Apple is set to unveil its next iPads at an October 22 event.

Out of the teenagers in your family–how many are using iPhones and iPads?