According to a new comparison by PhoneArena, measuring actual screen area when viewing most standard definition video on iPhone X vs the iPhone 8 and 8 Plus, it seems that the usable screen area on iPhone X shrinks to that of a standard aspect phone with a 5″ diagonal for SD videos, which is 16% less than what the iPhone 8 Plus has to offer as screen area while watching video.

“The usable area of the iPhone X display is akin to a standard ratio phone with 5.4″ diagonal, which is about what the 8 Plus offers, explaining the numbers above. Blowing up he picture with either the YouTube app’s zoom-to-fill option, or the iPhone X’s own double-tap full screen mode in, say, Netflix, will take away of the footage not only in the notch area, but also will crop the sides down to the screen’s aspect ratio.”

So in terms of watching video on your iPhone, the advantage seems to shift significantly form iPhone X to the cheaper iPhone 8 and 8 Plus. Since the iPhone X has a 19.5:9 display aspect ratio, it blackbars regular formats that form the vast majority of YouTube videos, or crops some part of the video out when zoomed-to-fill in compatibility mode.

Here is a picture for comparison of actual video screen area on the three iPhones: 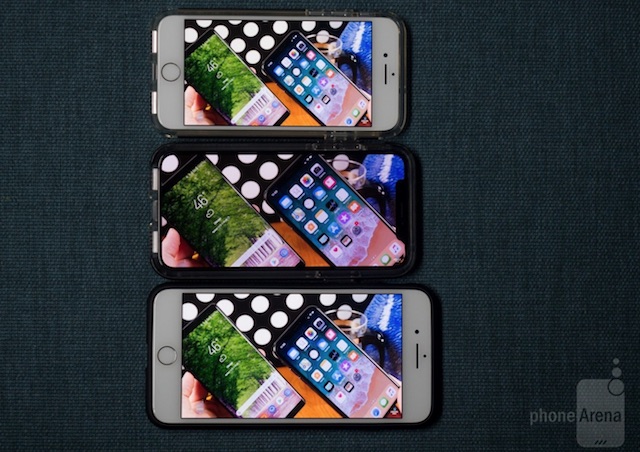 It must be noted however that when watching a movie or TV series shot in the 2:1 Univisium format (such as House of Card on Netflix), the power shifts to the iPhone X, although these are still few and far between.