YouTube channel PhoneBuff is back with another unscientific speed test, with this time putting Apple’s latest iPhone X against the Samsung Galaxy Note 8.

The iPhone X has the A11 Bionic chip and 3GB of RAM, while the Galaxy Note 8 has a Snapdragon 835 CPU and 6GB of RAM. 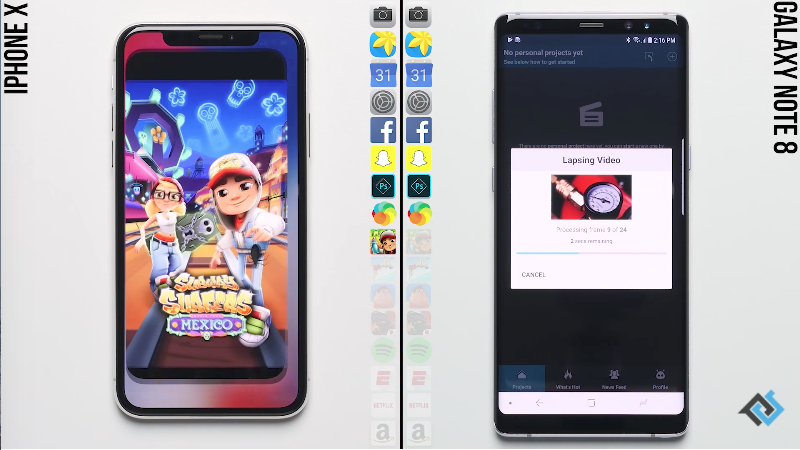 PhoneBuff’s tests consist of opening a series of apps once, then reopening them to test multitasking capabilities in a timed circuit.

Last month, the Galaxy Note 8 beat the iPhone 8 Plus by six seconds to take the crown, so with the iPhone X up next, maybe revenge for its younger sibling was in the cards?

Not so fast, because the tests ended up the Galaxy Note 8’s favour, because the iPhone X failed to keep some games open in the background (Flip Diving was not iPhone X optimized, nor was Subways Surfers and Bullet Force), which may be a result of having ‘only’ 3GB of RAM. In the end, the Note 8 won by 22 seconds.

Other apps not optimized for iPhone X in the video include Photoshop, Lapse It and Spotify.