iPhones From China–iPhones to China!

The New York Times recently wrote about the massive grey market there. As you may already know, millions of iPhones are manufactured in China. Once they are exported to the USA, they are smuggled back into China. Yes, that’s right. Made in China, then smuggled back in. It’s kind of funny when you think about it.

People have been asking friends, relatives, and tour guides to the States to bring back iPhones for them. Even airline crews have been paid money to help smuggle back iPhones. This is not a surprise, as it was recently revealed by China Mobile that there are roughly 400,000 iPhones in China–yes, 400,000!

It would be interesting to see how many iPhones there are in Canada right now. Apple says they sold about 3.7 million iPhones, yet only 2.3 million are registered in the USA and Europe. Gee, the iPhone really gets around, huh? 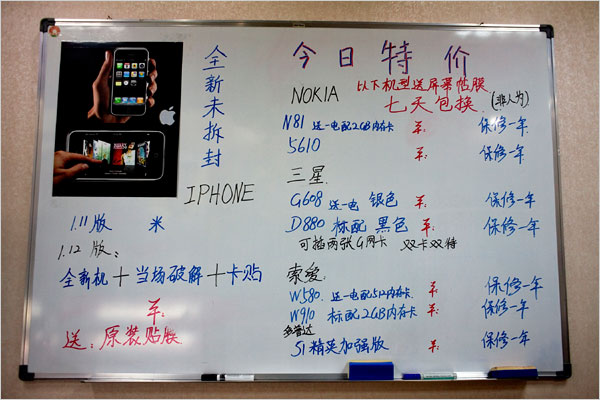 So here’s my scientific survey:

Do you own an unlocked iPhone in Canada?

In partnership with Huish Outdoors, Apple has released the new Oceanic+ dive app for the Apple Watch Ultra, which the company has been highlighting as the closest thing to an ‘official’ Apple dive app. In a detailed hands-on review of the Apple Watch Ultra and the Oceanic+ app, the folks over at DC Rainmaker have...
Usman Qureshi
4 mins ago

WhatsApp has finally introduced a new feature that makes it easier to message yourself, by allowing you to send notes, reminders, and shopping lists to yourself for easy access (via TechCrunch). The feature called ‘Message Yourself’ is set to reach all iPhone and Android users in the coming weeks. The feature was previously being tested by select beta users,...
Usman Qureshi
33 mins ago