Apple announced the iTunes Match service at WWDC 2011, and it launched in Canada eight days before Christmas on December 15, 2011. I immediately paid the $27.99 fee and subscribed. I was excited at the thought of being able to match the 5500+ songs in my library to the iTunes Match service, allowing access to my music collection from the cloud on any iOS device. This feature was especially valuable since I only have a portion of my library on my iPhone at any given time. I also appreciated the feature that allowed lower bit-rate song files to be upgraded to 256Kbps, especially those purchased or ripped a few years ago when iTunes still defaulted to 128Kbps. 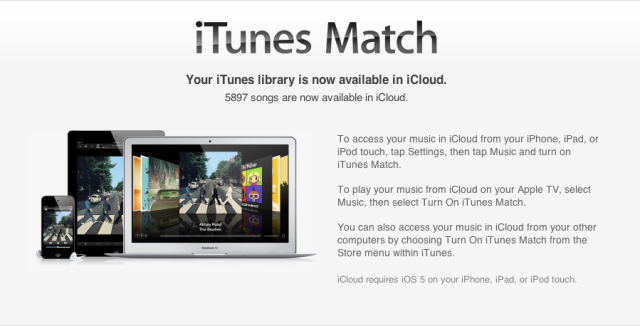 So, now that I’ve used the service for the past 6 months, let’s see how it has worked out.

The core service generally works well. Music in your iTunes library is matched or uploaded, and is then available from any iOS device or computer where you have iTunes installed and iTunes Match enabled, up to a maximum of 10 devices.

On your Mac or PC, songs that have been matched or uploaded can be deleted from your computer and streamed on demand without having to re-download them first. You could effectively delete your entire music collection from your hard drive and still have access to all your music as long as you continue to subscribe to iTunes Match and your Internet connection is active.

Upgrading lower bit-rate songs works well. After the matching process is complete you simply delete the original copy of the song and then download the matched 256Kbps version to replace it. This feature also works with digital song files that have been obtained from other sources, such as Amazon, 7digital, etc.

On the other hand, sometimes things don’t work so well. I’ve experienced situations where matched songs fail to download or fail to stream from iTunes Match, often with no error messages. Usually it will work later, so this might just be related to server issues at Apple’s end, but it’s annoying when you’re trying to listen to your music but can’t.

On a couple of occasions I’ve added songs where none of the tracks were matched so they got uploaded instead. I deleted the local copies of the files, leaving myself the option to stream the tracks on demand. Later, when I went to play the album, iTunes Match refused to either stream or download any of the tracks. There was again no error, and I ended up having to repeat the matching process again before it would work. This obviously concerns me since you need to trust that when items are flagged as uploaded, they actually are. I’d recommend keeping a local backup of anything you upload and delete just in case.

Sometimes the matching process doesn’t work well. Usually it’s individual songs, but occasionally it’s the whole album. For whatever reason, some tracks refuse to match and are uploaded instead. It’s not just tracks from some obscure album either, we’re talking about David Bowie’s “Ziggy Stardust” or Beastie Boys “Hot Sauce Comittee Part 2”. On these albums and many more there are multiple songs that refuse to match no matter what. I sometimes find that converting the file to AAC will cause it to match though I have no idea why.

Except When It Doesn’t

Then we come to the downright annoying little glitches that can really test your patience.

Songs downloaded to iOS devices over 3G can stall or fail to complete even though the 3G signal is good, and sometimes songs don’t download fully on iOS devices despite showing as completed. If you select “Download All” while on 3G, it’s pretty rare if all the songs actually complete in my experience.

Songs downloaded on iOS devices sometimes fail to play until deleted and re-downloaded. I ran into this recently where every song on my iPhone failed to play. I had to delete each and every album on the device individually () and download them again. As usual, there were no error messages. Update: It’s been pointed out in the comments and also via Twitter that you can delete all songs from your device via Settings -> General -> Usage -> Music -> Edit -> All Music -> Delete. Thanks to everyone who pointed this out.

Some songs in the cloud may fail to start or skip to the next track on iOS devices, even when you have a stable Internet connection. You’ll press play but nothing happens. Eventually it might skip to the next song, or it may sit there doing nothing. It’s quite annoying, but often if you return to the original song you can get it to play the second time around. You may also see album artwork randomly failing to load, or reloading every time you play an album.

And finally, the kicker for people like me. Songs that have explicit lyrics occasionally get matched and downloaded as clean. This is the one that gets on my nerves the most. I’ve had this happen with the song “Make Some Noise” from “Hot Sauce Comittee Part 2” by Beastie Boys and tracks from a few other albums I own. I opened a bug report with Apple last December and they’re still working on it (I think).

Is It A Good Match?

At the moment, I’d consider iTunes Match as useful, but not 100% reliable. It works for the most part although there are some annoying issues that need to be resolved as soon as possible. The convenience of being able to stream music to your computer combined with the ability to download songs to iOS devices on-demand is great, when it works. However, the quirkiness and buggy behavior on iOS devices can leave a lot to be desired considering that this is a paid service.

At a minimum I would recommend that users back up their iTunes music library before enabling iTunes Match just to be safe, and that they perform regular backups of their local iTunes library, especially if they plan to delete the local files and stream online.

How has iTunes Match worked for you? Let us know in the comments.