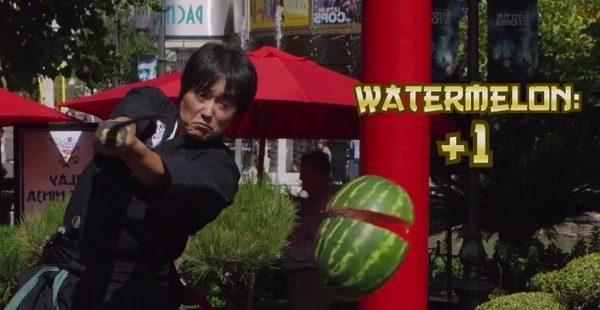 We’ve all seen that real life Fruit Ninja video from a couple years back. But now, Pillsbury is taking things to another level to tout their Toaster Strudel. They hired world-renowned Japanese swordsman, Isao Machii, flew him to L.A. to slice up some fruit and show us all how it’s done.

This is probably how we would all imagine Fruit Ninja to be in real life, right?

I wonder how much Machii got paid, or if he accepted a lifetime supply of Toaster Strudels instead. Actually, I shouldn’t say that as I wouldn’t want to make him angry. This modern samurai can slice a BB pellet travelling at 350km/hr in half!

Here’s the other real life Fruit Ninja video from December 2012:

Which one is better?

Click here to download Fruit Ninja in the App Store–despite being a classic iOS game that’s over four years old, it is still is receiving updates from Halfbrick Studios.

Ming-Chi Kuo has today claimed on Twitter that Apple is no longer working on its own WiFi chips, leaving Broadcom as the biggest winner of the iPhone 15’s upgrade to WiFi 6E. According to the veteran Apple analyst, Broadcom will be the leading beneficiary of the WiFi industry-standard upgrade to Wi-Fi 6E/7 with higher ASP. “My...
Usman Qureshi
18 hours ago