Since LG acknowledged and fixed the issues of flickering displays and disconnections when close to Wi-Fi routers, sales of the revised UltraFine 5K display have resumed. But the question remains as to how to tell whether the new display customers have purchased feature the fix, since there are products with different serial numbers. MacRumors indicated that products with serial numbers beginning with 702 or 703 are the winners, but recently customers reported that they have received units shipped from Apple with serial numbers starting with 612.

The serial numbers reflect manufacturing dates, so the latter indicates the unit was manufactured in December 2016, so it could sport the unwanted display-flickering “feature”. So, after a reader checked the label on the box of his December UltraFine 5K display, he noticed some differences between those with the issue and those that include the fix. 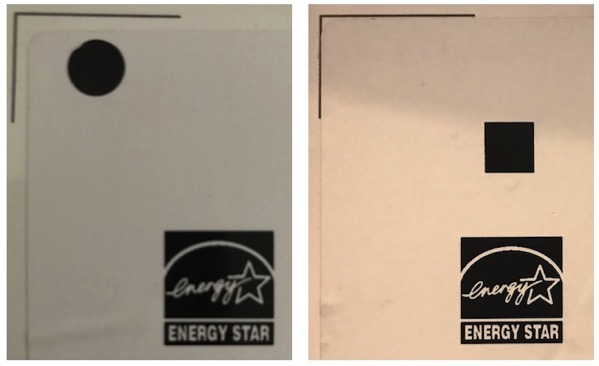 He noticed that the label included a black circular sticker in the top left. That wasn’t present in on the original UltraFine 5K display manufactured in November.

The newly manufactured LG displays include a black square printed directly on the label in the same location, which indicates that the unit has the revised internal shielding, so users should not have any issues with them, as confirmed by LG to MacRumors.

While LG refrained from explaining the difference between a square and a circle, this appears to indicate that the display you are purchasing includes the internal shielding necessary to fix the issue. If yours does not, then you have a problem.