Liquidmetal Technologies Extends Its Agreement With Apple For 2 More Years

Liquidmetal Technologies, a leading name in the research, development and commercialization of amorphous metals, has announced an extension of its agreement with Apple for an additional two years (via MacRumors). Apple has a full license to use all of Liquidmetal’s intellectual property for commercialization in consumer electronics. The rights were acquired by Apple in 2010 after testing the material in the iPhone 3G SIM eject tool. With the new agreement, these rights have now been extended till February 5, 2014. 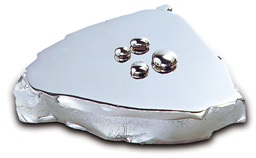 The foregoing does not purport to be a complete description of the Amendment and is qualified by reference to the full text of such agreement, which will be filed with the Company’s next Quarterly Report on Form 10-Q.

Experts believe that a broader use of Liquidmetal’s alloys, which offer improvements in strength and durability over current alloys is still a few years away.

As part of its continuing production diversification initiative, Apple has ordered for a portion of its AirPods and Beats headphones to be manufactured in India. Apple has begun to double down on manufacturing its devices in India. As a way to lower its dependence on China, Apple has made an order to its suppliers to...
Steve Vegvari
29 mins ago