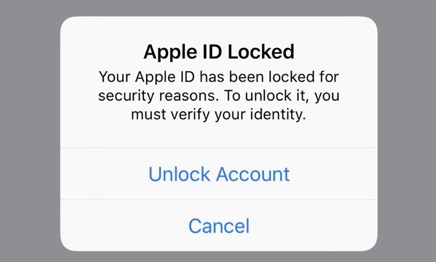 As pointed out by AppleInsider, a growing number of iPhone users are reporting locked Apple IDs for seemingly unknown reasons, as a result of which they are unable to access their stored data and related services on any of their iOS devices linked to that Apple ID.

“Reports from users surfacing on Reddit and other social media platforms claim their iOS devices asked for the Apple ID password to be entered. After entering what is believed to be the correct password, in some cases, a pop-up message advises the Apple ID is locked for “security reasons,” and that users have to verify their identity to unlock the account.”

Fortunately, users are able to restore access by following the usual “Unlock Account” instructions which involved answering security questions or simply following the steps on Apple’s website here. Once done, a new password needs to be set to gain full access to all Apple ID-related services.

So far, no cause has been identified although the majority of unlocks reportedly happened at the same time at about midnight eastern time. It is believed that an error in Apple’s account security protocols may have triggered the event, or may even have been caused by some malicious attack on Apple’s servers.

Apple has not yet issued an official comment, although an insider source said, “At present, this doesn’t appear to be an Apple bug. Whatever it is, it is only impacting a minute percentage of our users.”

Have you been locked out of your Apple ID lately?