According to a study carried out by famous Anti-virus makerÂ McAfee, Android is the most vulnerable mobile OS and is having serious issues with all sorts of malware with approximately 76% rise in viruses, trojans, and other rogue pieces of code that have affected the Google’s mobile platform in the second quarter of 2011. Around 44% ofÂ Android users are now running into various malware issues. According to the report, some of this malware that sends unwanted text messages or shows other scammy behavior, is found in apparently legitimate applications. 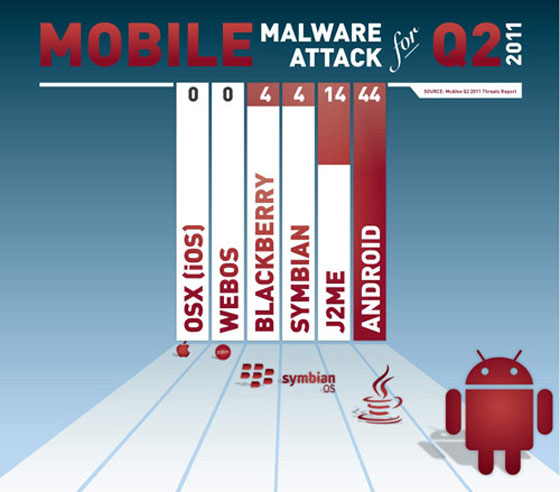 On the other hand, iOS is doing great keeping all the iPhones, iPods and iPads untouched by any malware attacks. McAfee has found zero legitimate threats to the stock iOS while only four attacks were noted which all came to the jailbroken devices. It seems Apple’s strategy of not allowing apps from outside of its own store, which may not be convincing for some developers and customers, has actually paid off.

The gap wasn’t directly explained by McAfee, although Symantec and others have already cast it as a matter of OS policies. Apple, while criticized for not allowing apps outside of its own store and often being strict on what apps can do, has been well-received in security studies. The requirements for signed, reviewed apps has prevented titles from installing themselves without permission, and it has blocked apps that might appear honest on the surface but compromise the lower-level OS behind the scenes

In case you’re wondering how webOS is the only other mobile OS with a flawless score? well probably because it’s just not used that much!

Samsung and LG are gearing up to start mass production of displays for Apple's first OLED iPads, according to a report from the South Korean publication ETNews (via MacRumors). The information comes from Ross Young of Display Supply Chain Consultants, a well-known industry analyst. According to Young, both South Korean display manufacturers will produce "hybrid" panels for...
Nehal Malik
10 mins ago

Google announced an experimental conversational service based on artificial intelligence today, called Bard, confirming what was reported last week. The details of Bard look to compete against the rise of Open AI’s ChatGPT, with the latter’s inventor backed by a $10 billion investment from Microsoft. On Monday, Google CEO Sundar Pichai detailed more about its […]
Gary Ng
41 mins ago