Following Apple’s release of iOS 8 earlier this week, Microsoft has announced that it will be offering all iOS 8 users 30GB of free space on OneDrive.

“Tonight, we are pleased to announce that we are doubling the amount of free storage you get with OneDrive. While it might seem strange to announce new features on a Friday evening, we’ve been listening to the commentary about storage on the new iPhones released today and we wanted to get you more storage right away. We think you’ll appreciate having more free storage while setting up your iPhone 6 or upgrading to iOS 8.” 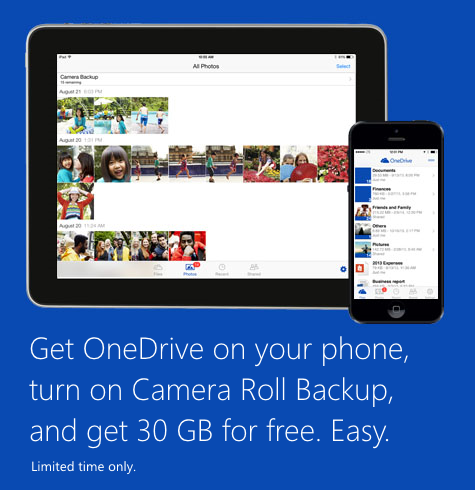 In order to claim the additional free storage space users must sign up for OneDrive and turn on the auto upload feature for your camera roll. The offer is valid from today until the end of September.

“For those getting ready to install iOS 8, this means you won’t have to delete a bunch of photos or apps to make room for the upgrade.”

Microsoft will be offering the 30GB (15GB standard + 15GB for enabling automatic camera upload) of free space for all iOS, Windows Phone, and Android users. If you are running out of storage space on your iPhone or iPad be sure to take advantage of this offer.