Microsoft Users Can Now Remove Passwords From Their Accounts

Hoping its users would embrace a passwordless future, Microsoft has just rolled out the ability to remove passwords from Microsoft accounts, allowing users to instead sign in using the Microsoft Authenticator app, Windows Hello, or an SMS / email verification code (via The Verge). 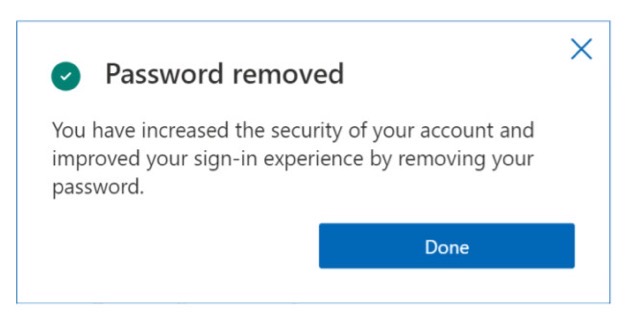 “When I think of security, I think you’ve got to protect your whole life,” said Microsoft VP Vasu Jakkal in a recent interview. “It’s no longer enough just to think about work or home and anything in between,” he added.

Jakkal explained how Microsoft has been working toward a passwordless future for years. “When you have digital transformation and businesses having to go remote overnight … the number of digital surfaces has increased exponentially,” he said.

“The number of attack surfaces has increased exponentially, so that was a big driving factor for us in accelerating a lot of our security initiatives.”

“We have been rolling this out at Microsoft and nearly 100 percent of Microsoft is now passwordless,” says Jakkal. More than 200 million people are already using passwordless options, and Jakkal is optimistic about the adoption among consumers.

To remove your Microsoft account password, you need to have the Microsoft Authenticator mobile app installed and linked to your Microsoft Account. Once done, simply visit account.microsoft.com to go password-less.

While releasing the first trailer for the Antoine Fuqua-directed historical drama, Apple has today announced that Will Smith’s next film ‘Emancipation' will premiere in theaters on Dec. 2 and will stream on Apple TV+ starting Dec. 9. According to Variety, Apple’s decision to delay the film to 2023 after Smith became embroiled in controversy for slapping...
Usman Qureshi
15 mins ago

Even though Sony's first VR headset took 8 months to sell a million units, the company is betting big on its next-generation PlayStation VR2 headset with an increased production plan, according to Bloomberg. Citing people familiar with the matter, the publication notes that Sony is planning to make 2 million units of the PlayStation VR2...
Usman Qureshi
34 mins ago