After 32 Years, Microsoft Paint is Set to be Killed Off 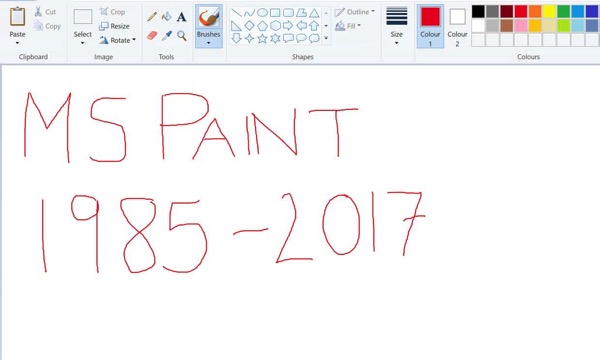 In Microsoft’s next Windows 10 update dubbed the ‘Autumn Creators Update’, the company is killing-off Microsoft Paint, 32 years after its debut back in 1985 with the very first version of Windows 1.0, as reported by The Guardian. Microsoft introduced the new Paint 3D earlier this year, which is installed alongside traditional Paint and features 3D image making tools as well as some basic 2D image editing.

Microsoft has announced that, alongside Outlook Express, Reader app and Reading list, Microsoft Paint has been signalled for death having been added to the “features that are removed or deprecated in Windows 10 Fall Creators Update” list.

Paint in its various guises would be one of the first graphics editors used by many and became a core part of Windows. Starting life as a 1-bit monochrome licensed version of ZSoft’s PC Paintbrush, it wasn’t until Windows 98 that Paint could save in JPEG.

While Paint was never one of the most capable app  and was limited to the bitmap (BMP) and PCX formats until 1998, if you wanted to scribble something out using your mouse or make a quick cut and paste job, Paint was always there. The most recent version of Paint for Windows 7 and later was much improved, but still considered feature poor compared to other free alternatives.

Will you miss Microsoft Paint, one of the longest-standing apps in history?