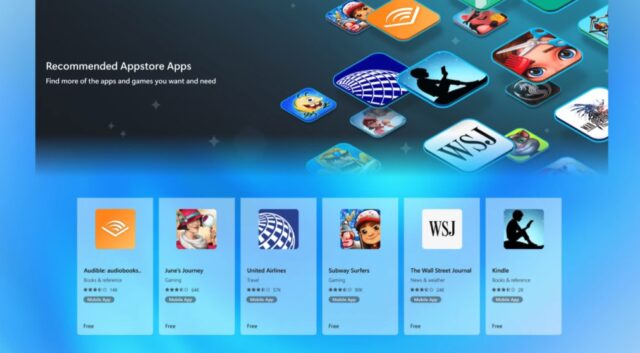 The latest iteration of Microsoft’s Windows Operating System, Windows 11, was supposed to start shipping on October 5, 2021, with the ability to download and run Android apps through the Amazon Appstore. While Windows 11 launched as scheduled, support for Android apps was nowhere to be found.

Microsoft needed more time to polish the feature, and beta testers participating in the Windows 11 Insider Program have been testing it for a while now with limited support for around 50 apps, including Amazon’s Kindle app, Apple Music, The Washington Post, Clash of Kings, Coin Master, and Lego Duplo World, among others.

However, Microsoft on Tuesday expanded support for Android apps to public Windows 11 users and more than 1,000 mobile apps and games — reports TechCrunch.

The Amazon Appstore Preview has landed in the Microsoft Store, and Windows 11 users in the U.S. can now download over 1,000 Android apps and games, including Audible, Subway Surfers, Lords Mobile, Khan Academy Kids, and more, through it.

Windows 11 is able to run Android apps and games via Microsoft’s new Windows Subsystem for Android, powered by Intel’s Bridge Technology. The implementation allows Android apps to run and behave in a way that is as native as possible to Windows and even supports Windows inputs and features like window snapping.

To get the Amazon Appstore Preview, users will need to open and then update their Microsoft Store. To do so, go to Microsoft Store > Library and click on Get Updates.

Once you have access to the Amazon Appstore Preview, you can use it to search for and download your favourite Android apps and games.

Alongside expanded support for Android apps, Microsoft has also started rolling out a number of Windows Taskbar improvements and revamped Media Player and Notepad apps. The latter features will make their way to users in the February 2022 non-security preview release.