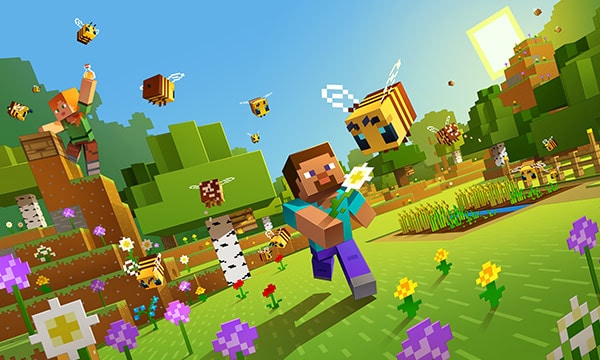 Minecraft developer Mojang has come out and discussed its policies and views on the use of non-fungible tokens (NFTs) and blockchain within its servers and community.

In a blog post, Minecraft staff members alert the community that the studio is updating its Usage Guidelines. As such, Mojang took a moment to address an issue that is said to be brought up across the community, which is NFTs and blockchain. In a very bold proclamation, Minecraft staff members make it clear by saying the “integrations of NFTs with Minecraft are generally not something we will support or allow.” The Microsoft-owned studio goes on in more detail to explain its relationship with NFTs and its policy.

The studio starts with a brief explanation of what an NFT is and its use on the blockchain. Staff then state that any player who actively buys, sells, or trades NFTs that make use of NFTs, it’s encouraged to continue reading through the Minecraft Usage Policies as there are a number of concerns brought by the use of them.

“Blockchain technologies are not permitted to be integrated inside our client and server applications, nor may Minecraft in-game content such as worlds, skins, persona items, or other mods, be utilized by blockchain technology to create a scarce digital asset,” the studio writes.

Mojang cites that the use of NFTs can cause security concerns, and attempts at fraud. Plus, enabling some players to have exclusive skins, weapons, worlds, etc. creates scarcity and player exclusion. As such, these ideals go against “Minecraft values of creative inclusion and playing together.”

As the developer notes, third-party companies have already started using Minecraft servers to create and distribute NFTs. Once again, the studio has gone ahead to denounce these efforts as the developers believe these companies “may not be reliable and may end up costing players who buy them.”

Mojangs’ public statement against NFTs comes at a time when more studios and publishers are exploring the possibilities and use of the blockchain. Ubisoft launched its Quartz NFTs platform earlier this year with very poor reception and turnout. This year also saw Square Enix discuss its eagerness to explore the possibilities of the blockchain. However, other studios and publishers, like Nintendo, have made it very clear that they have no interest in the matter.

Minecraft is one of the most successful video games in the world. It speaks volumes and sets precedence when its developers make a public stance on the matter.

Twitter on Friday confirmed a December 2021 security breach that stole data from more than 5.4 million user accounts using a zero-day exploit — reports BleepingComputer. The hack exploited a vulnerability in the mechanism that Twitter lets users link email addresses and phone numbers to their accounts. Threat actors were able to submit an email...
Nehal Malik
15 hours ago