Twitter-owned Periscope, which allows anyone to broadcast live to a global audience and enable viewers to interact in real time, has today received a new tool to combat spam and abuse during live broadcasts. A new comment moderation tool is now accessible by tapping on a comment within a broadcast. People can report comments for being spam or abuse, which are then shown to randomly selected live viewers to help moderate them (via Medium). 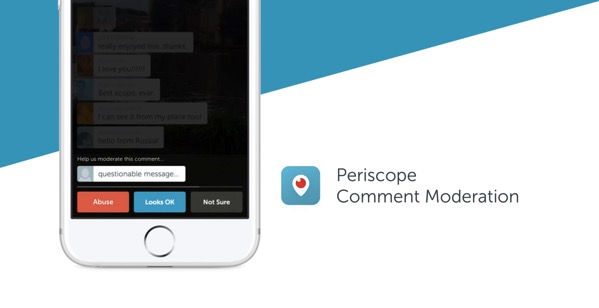 “We’ve designed this system to be very lightweight?—?the entire process above should last just a matter of seconds. This system works in tandem with other tools that we have in place for our community. You can still report ongoing harassment or abuse, block and remove people from your broadcasts, and restrict comments to people you know.

There are no silver bullets, but we’re committed to developing tools to keep Periscope a safe and open place for people to connect in real-time”.

To learn more about the new feature, visit this link.