Taxi drivers in Montreal made it clear yesterday their fight against Uber will not be over easy, as they upped their protest by egging Uber cars and offices, leaving them scrambling for cover, reports the National Post.

Tensions boiled over and cracked when hundreds of taxi drivers protested in downtown Montreal, parking their taxis along Sherbrooke and René-Lévesque Blvd at rush hour to demand the Quebec government intervene against Uber, while also calling for Premier Philippe Couillard to resign. As taxi drivers spotted two UberX cars during their protest, a plan was hatched to pelt cars with eggs.

CBC News reports at one point, taxi drivers lured UberX drivers to the protest site by hailing them through the company’s smartphone app. When one driver showed up, he was ambushed with snowballs and eggs, with one hitting him in the face.

Uber’s Montreal offices were also targeted around lunchtime, as drivers parked their vehicles blocking off Richardson Street, honking horns and blowing air horns. This is when some started throwing a couple dozen eggs at the office, splashing doors over hard. 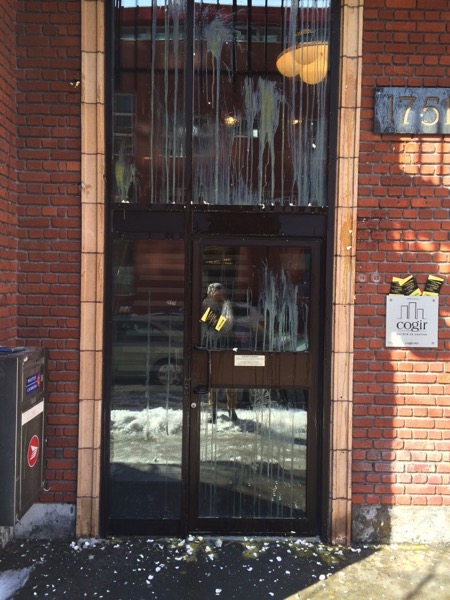 One taxi driver with a megaphone yelled “Uber, this is our first friendly warning,” despite employees coming outside pleading with the group to stop. Montreal police monitored the situation but did not intervene. Security guards locked office doors from the inside.

Uber protester Hassan Kattoua donned a sheriff’s badge and acknowledged the message being sent to the premier was clear:

“What you are doing, Mr. Couillard, is a scandal,” Kattoua said. “You remove one of your ministers (former transport minister Robert Poëti) and reduce his level to a deputy in order to pass your agenda of legalizing UberX. It doesn’t work with us. Over our dead bodies.”

Kattoua claims Uber has resulted in a 50 per cent decline in his business and his taxi permits have plummeted in value about $50,000 to $60,000, as UberX poaches his earnings.

“The mayor of Montreal sends a message to Uber to stop their service and they don’t even listen. We live in a banana republic.

“The law is clear. They have to apply the law and we don’t accept this commission because it’s biased in the favour of UberX,”

Uber spokesperson Jean-Christophe de Le Rue, condemned Wednesday’s actions by taxi drivers saying “We strongly condemn the violence and intimidation tactics used today by members of the taxi industry,” adding “The government has put in place a commission to hear the views of stakeholders and we believe that the best path forward will be found through dialogue, not violence.” The commission hopes to find a sunny side to the tense situation.

Just over a week ago, Montreal taxi drivers protested at the Pierre Elliott Trudeau Airport, as part of their “Uber hunt” against the ridesharing company.

Not sure what these taxi drivers are thinking, but throwing eggs won’t get the public to support you and understand the yolk of the matter. Time to hire a PR firm to nest up dozens of different strategies instead.

Back in September, Pluto TV announced it would be launching in Canada in December and as of today, the free ad-supported streaming TV service is now live. This new Free Ad-Supported Streaming Television (FAST) service is from Paramount Global, with Corus Entertainment Inc. as its Canadian partner. Pluto TV says it is the world’s leading […]
Gary Ng
2 mins ago

Amazon has revealed its offering of free games arriving for Prime Gaming members. This month, subscribers can gain access to eight titles and new in-game content to a series of ongoing games. December sees Amazon host one final month of free games for the year. Closing out 2022, Prime members can redeem and play Quake,...
Steve Vegvari
58 mins ago